Nicki Minaj just don’t know how to be herself or maybe she really idolizes Lil Kim. Diddy and Nicki Minaj shot the remix video to “Hello, Good Morning,” the other day and Nicki was spotted jacking Lil Kim style again. Check the picture and video below, and you be the judge. 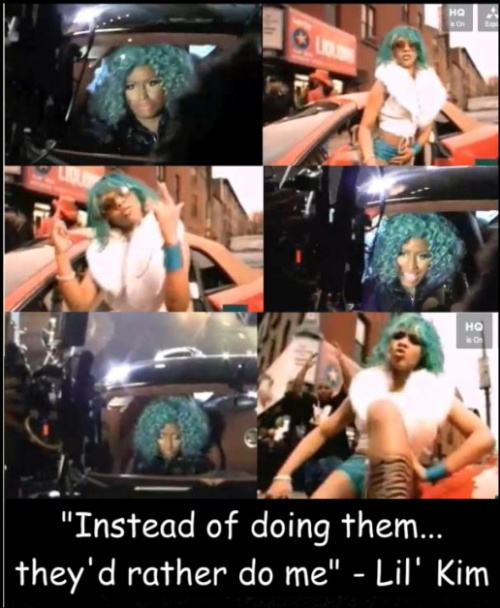 Breaking News: Foxy Brown and Eve To Tour Together

Femcee’s Foxy Brown and Eve will be touring together on the Street Cred Tour, along with Jadakiss Too Short, Mystikal, Juvenile and DJ Quick. Lil Kim was supposed to be on this tour as well but she pulled out due to unforeseen circumstances. The first show is schedule to take place at Fox Theatre in Detroit on May 22nd. Tickets are on sale now ($48, $58, $68 and $78) and may be purchased at OlympiaEntertainment.com, the Fox Theatre, and all Ticketmaster locations and Ticketmaster.com.

I wonder how this is going to work out because Foxy and Eve doesn’t like each other. Over the years, they released diss song going at each other.

Foxy Brown Interview with Wendy Williams Going In On Eve

Yesterday (May 14th) the big homie Jay-Z signed autographs for the fans as he exited Bar Pitti restaurant in New York City.

Comments Off on Jay-Z Signed autographs In NYC [With Pictures]

Christina Milian Styling On Them Hoes In Christian Louboutin Shoes

Singer/Actress Christina Milian was spotted at Nylon Magazine’s “Young Hollywood” Party. She was wearing a pair of yellow Christian Louboutin Short Tina suede fringe pumps ($1,095),  with a  Gucci Interlocking G belt. Christina has always been bad, but it’s sad that her career still hasn’t risen to the top after ten years in the game.