Kanye West Goes Off On MSNBC & Other Media Outlets 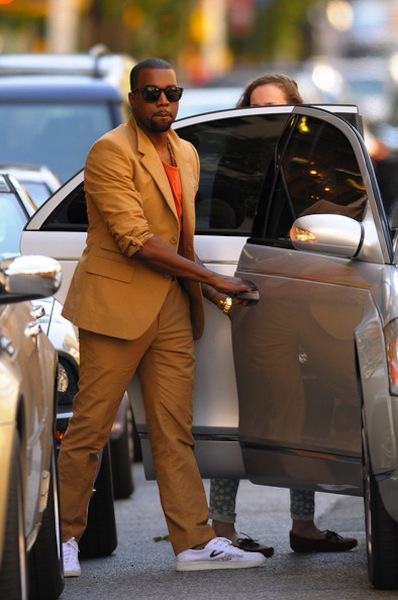 Earlier this evening, platinum selling Def Jam recording artist Kanye West took to his Twitter account @KanyeWest to expressed his feelings toward MSNBC and other media outlets. It all started last week when Kanye jokingly sent the tweet below to Britney Spears and Avril Lavigne.

“Yo Britney, I’m really happy for you and I’mma let you be #1, but me and Jay-Z’s single is one of the best songs of all time! LOL. On a serious note I’m truly happy for @AvrilLavigne and @BritneySpears…… No hate in 2011! I thought LOL signified a joke… I didn’t get the 2011 LOL doesn’t signify a joke anymore memo… LOL or something else I guess”-Kanye West

After Kanye caught light of MSNBC and other various sites reporting his tweets as slander, he addressed the media. Read below to see what Kanye had to say.

“Just saw that MSNBC said I tried to start a twitter war with Brittany. This shit takes the air out my lungs sometimes from blogs to news reports… enough already!!! All I do is focus on my work. There’s a new lie everyday… a new media spin… I never got a watch with my face on it!!! A company tried to give that to me 9 yrs ago! I’m one of the most considerate people in real life. Maybe over considerate. Over caring. Overly real. There is no astronaut training for celebrity… even though this whole life is so outer space! I was actually surprised that a record as raw as H*A*M could make it to #2 on Itunes. How can u “let” someone be number one??!! That was the whole joke!!! I know intelligent people know this so bear with me. When I said the comment about Brittney I was giving her props for being #1 not dissing her at all! But stop making it seem that my aim is to hurt or down people! That’s just not my style! As pop stars we’re all in this shit together! We on the inside of the TV! If the media wants to make a story … just say I have atrocious spelling and terrible grammar…If you don’t give em a story they just make one up. I’m just trying to focus & stay creative! Keep bringing dope shit to the world! Once again thank you to all my fans who made MBDTF certified platinum! You all give me the power and I never take it for granted. I am an extension of my listeners. I won’t always say the right thing but my heart is always in the right place. Thinking out loud… Whenever I read press I just need to remind myself that there’s people that care about music and don’t care about press.”-Kanye West 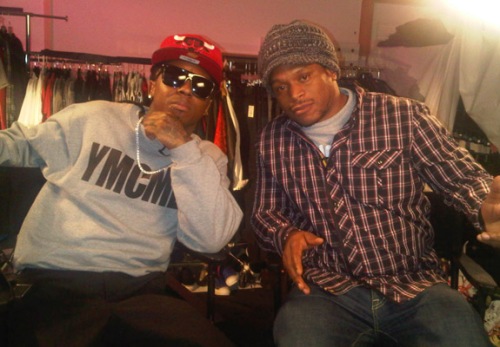 I am giving you guys two exclusive pictures from the set of Lil Wayne Ft. Cory Gunz “6 Foot 7”  video shoot.  The production for the video started last Thursday (January 13) at an undisclosed location in Miami. The YMCMB camp is being very tight-lipped about the video but I do know that the story is a nod to a popular, recently released movie.

The official video should be out the first or second week of February. Stay tuned into YoDonBleekRaps for more exclusive pictures.

Ladies and Gents, the official remix to Nicki Minaj’s “Roman’s Revenge 2.0” Ft. Lil Wayne has finally been released. Lil Wayne was not able to make the cut for Nicki’s debut album Pink Friday because he was serving an eight months prison term for a gun charge in New York City but as promised he is featured on the remix. Wayne went ham on this track. By the way, was Wayne sending a subliminal at someone when he said, “Old ass rappers/I’m still the shit, old ass pampers?” Listen to the track below.

New York’s Hot 97 DJ Funk Master Flex recently dropped the bomb over Bad Boy recording artist Red Cafe new track “Faded” Ft. Rick Ross. On the song, Cafe kept it Brooklyn as usual and Ross went hard. As of press, no word on what project this track will appear on. Listen to the track below.

Rick Ross took to his twitter account @RickyRosay to twitpic $10,000 worth of Louis Vuitton, Gucci and MCM luggage. Ross’ luggage consist of two LV Damier Graphite Canvas Keepall 55 with shoulder strap carry-on $1,250, one LV Damier Ebene Canvas Keepall 55 with shoulder strap carry-on $1,250, two Damier Graphite Canvas Michael backpack $1,530, one Monogram Canvas laptop sleeve 15″ $715, one Gucci Guccissima backpack $1,050, one GG Imprimé with black leather trim carry-on duffel $1,390 and one MCM backpack but I was not able to find the price of that. Must be nice to be Rick Ross, he traveling with over $10,000 worth of luggage.

Gosh! Gucci Mane & Waka Flocka Are Getting A Reality Show 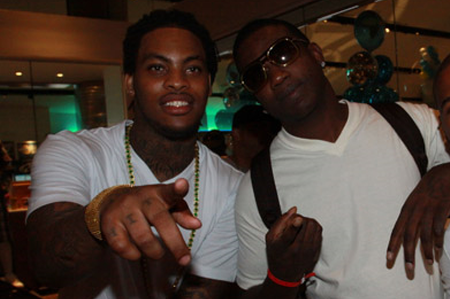 Just when I thought reality shows couldn’t get any worst; I hear that Gucci Mane and Waka Flocka are in talks with BET to get their own reality show. The reality show will showcase Gooch and Waka everyday lifestyle such as recording in the studio, living the Rock N Roll life, being family oriented and giving back to their community. I hope they have a translator for the reality show because I don’t want to hear the word “Burrr” throughout the show.

“We show everyday life,” said Gucci while talking to RumorFix. “What we get into in [the] studio and at our shows. We just ordinary people with a crazy Rock N Roll lifestyle.”

“Because of the music we make, people think that’s what we do all the time — but we got a real family life. We got heart. We do a lot of things for the community and we love each other.”

“I think they’ll get a laugh more than anything,” said Gucci about fans’ anticipated reaction to the show. “I’m not serious all the time. People think we are thugs because of our music.”

Harlem rapper Jim Jones’ escaped death this morning; his passenger van was involved in a car crashed and was totally destroyed. Jimmy is doing okay. Below is how Miss Info  is reporting the story.

I woke up today to a very scary email and photo from the homie Jim Jones….his passenger van was totaled in this car accident this morning. Thankfully thankfully, he also included this message, “Just walked away from this [crash]. God bless us.“

Just looking at this gives me anxiety remembering recent accidents that were much more tragic. So I’m thankful Jim is okay, and these kinds of messages always remind me to tell people I care about them. Also….please drive safely. No drinking. No sleepiness. No texting (that’s my new year’s resolution). And always seatbelts.
Sorry for the den-mother post.

Comments Off on Breaking News: Jim Jones’ Escapes Death In A Car Accident 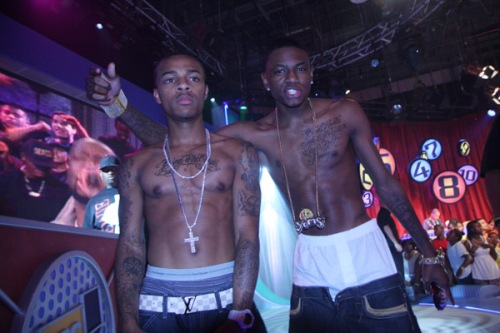 Cash Money new signee Bow Wow linked up with his homie Soulja Boy for “Get Money.” I am not a fan of either artist but I’m feeling the song and video. Bow Weezy and Soulja Boy Tell Em are riding around in their carolina blue and red Lamborghini’s in Miami. The two young millionaire are rapping about their pricey flashy lifestyles in the song. Love em or hate em, Bow and Soulja are two young millionaire who has a lot to brag about. I like the part of the video when they pulled up in the drive thur in their Lambos. The sexy females, diamonds, palm trees, gotta love this dope video. Peep the video below. 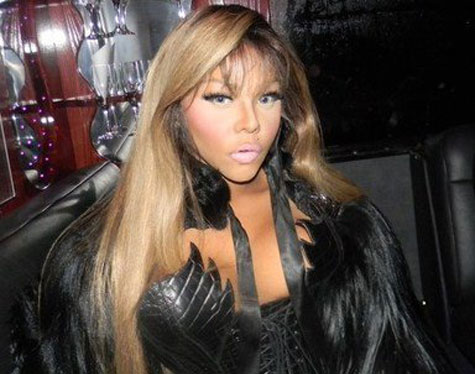 Kimmy Blanco added her expensive Brooklyn style to Fab’s “You Be Killin Em.” On the quick 16 bars that Kim spits, she raps about designer labels such as Polo, Louis Vuitton, Gucci, Prada and Dior. Listen to te track below.

“Killin’ ‘em like an abortion place/ Somebody wrap their casket in caution tape.”-Lil Kim

Dope or Nope, are you guys feeling this track?

Comments Off on Dope Or Nope?: Lil’ Kim Ft. Fabolous “You Be Killin’ Em” (Remix)

Tagged as "You Be Killin Em", Fabolous, Lil Kim