Shots Fired! Kanye West Goes At Wiz Khalifa “You Know You Kissing My D**k Whenever You Kissing That B***h Right?”

Kanye West recently took to his Twitter account @KanyeWest to send out a negative message to Wiz Khalifa. Kanye said “You know you kissing my dick whenever you kissing that bitch right?” Kanye was referring to Amber Rose. As I previously reported, Wiz Khalifa and Amber Rose Are allegedly dating. The two were recently spotted out in L.A. together on two separate occasions. Peep Kanye’s tweet below.

Comments Off on Shots Fired! Kanye West Goes At Wiz Khalifa “You Know You Kissing My D**k Whenever You Kissing That B***h Right?”

This past Thursday (January 20) the Harlem Diplomats appeared on MTV2 RapFix but all  four of the main members weren’t present. Cam’ron, Jim Jones and Freekey Zekey; along with newcomer Vado appeared live on the show. Cam’Ron said Juelz Santana was missing because he had an allergic reaction. Turns out, that was far from true. The real reason why Juelz was missing from the show is because the NJ Police raided his Bergenfield, NJ studio. During the raid, police found guns, drugs and arrested Skull Gang rapper Hynief, real name Toby Raynor, according to the Bergen County Prosecutor’s Office.

Two fully loaded 9mm handguns, boxes of ammunition and marijuana were found during the raid. The police said “Hynief sold marijuana to undercover Gang Unit detectives during a 10-month investigation.”  Hynief is being held on $50,000 bail. As of press, no word whether Juelz is in custody. Stay tuned into YoDonBleekRaps as this story develops.
Follow me @donbleek88

Dope Or Nope?: Nicki Minaj In A Ballerina Dress Overseas

From rapping on  stoop in Queens, New York to selling out shows in London; I have no other choice but to respect Nicki Minaj. She is the face of female Hip-Hop of our generation and she’s doing a great job at branding herself. Nicki Minaj is currently in London on a promo tour promoting her platinum selling debut album Pink Friday. 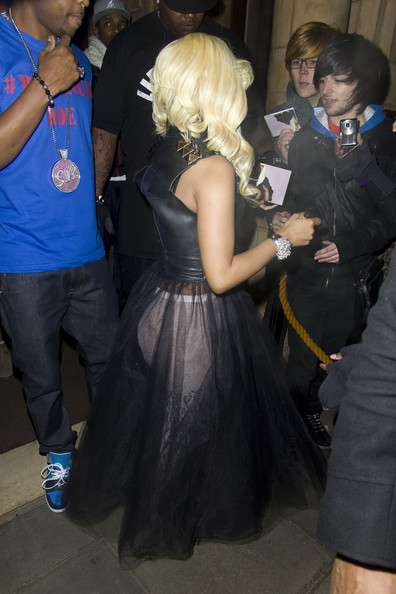 When Nicki wasn’t getting harassed by paparazzi at the airport, getting kicked out of her hotel or signing boobs; she was performing at a few sold out shows in London.

NEXT PAGE: TWO MORE PICTURES OF NICKI MINAJ IN LONDON

END_OF_DOCUMENT_TOKEN_TO_BE_REPLACED

Comments Off on Dope Or Nope?: Nicki Minaj In A Ballerina Dress Overseas

Filed under Dope Or Nope, Fashion

Swizzy Twitpic a couple of pictures of his collection of Christian Louboutin diamond studded loafers and biker jackets. Swizzy is working on or already has a line of his custom sneakers with Christian Louboutin. In my opinion, Swizzy is one of the most stylist male celebrities.

Swizzy also has a new album coming out sometime this year.

Former Roc-A-Fella rapper Neef Buck of the Young Gunz just released his new mixtape Forever Do Me 2. The mixtape features collaborations from Freeway, Peedi Crack, Pooda Brown and August. Neef’s Partner-N-Rhyme Young Chris is not featured on the mixtape.  Listen to Neef’s mixtape and peep his new video below.

END_OF_DOCUMENT_TOKEN_TO_BE_REPLACED

Tagged as "Alone Makes Me Strong", Forever Do Me 2, Neef Buck, Roc-A-Fella