Nicki Minaj must be having the time of her life Overseas. She is in London on a promo tour; promoting her debut album Pink Friday as well as performing at some sold out shows. Since being in London, Nicki has harassed by paparazzi at the airport, getting kicked out of her hotel, signing boobs and as she wrapped up her tour; she was chased by the police for trying to take a picture by the Buckingham Palace. Peep what Nicki tweeted below.

“Trying to take a picture by the Buckingham Palace.  Got chased by the police the 1st time but the paps helped us get pics from a different angle of the palace. Lmaoooooooooo. #moment4life” –@NickiMinaj

A lot of you guys probably think that I have something against Nicki because of the things that I said about her in the previously posts; but that is far from true. I just think she was totally out of line for saying the things that she said about Lil Kim, plus I was not feeling her music back then and still not. Now, I respect Nicki because she went from rapping on a stoop in Queens, New York to selling out shows in London; I have no other choice but to respect Nicki Minaj. She is the face of female Hip-Hop of our generation and she’s doing a great job at branding herself.

NEXT PAGE: FOUR MORE PICTURES OF NICKI MINAJ IN LONDON

END_OF_DOCUMENT_TOKEN_TO_BE_REPLACED 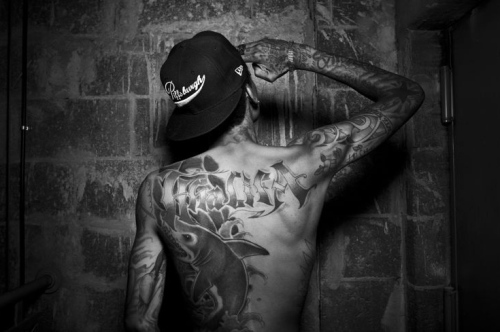 This past Friday (January 21) Wiz Khalifa performed at The Rave in Milwaukee. During Wiz “Black & Yellow” performance, he brought out his rumored to be new girlfriend Amber Rose. Peep the video below.

In related Wiz news, he will be performing “Black & Yellow” tonight during the tipoff at the NFL AFC Chapionship game between the host Pittsburgh Steelers & New York Jets.

Comments Off on Wiz Khalifa Brings Out Amber Rose Onstage; Plus His New Single “Big Screen”

Dollah Tha Rapper is an aspiring artist from the Mitchel Project’s section of the Bronx, New York. I have been managing him since May 2009. Right now he is in the studio recording tracks for his debut mixtape Billion Dollah Rapper (subject to change). As of press, a released date for his mixtape has not been set. Dollah and I are focusing on putting out singles and a few videos before we drop his actual mixtape. Dollah is in the studio creating a masterpiece. Once he feel like he is giving his fans his best work; he will put out his mixtape. Peep Dollah’s “You Be Killin Em” freestyle below.

Checkout a previous blog that I posted about Dollah: Ciara And Dollah Tha Rapper Styling On Them Hoes & Lames In $1,095 Christian Louboutin Heels & $575 Marmot Coat.

Comments Off on Artist Spotlight: Dollah Tha Rapper “You Be Killin Em” (Freestyle)

Tagged as "You Be Killin Em" (Freestyle), Dollah Tha Rapper