Diddy and Kim Kardashian inside of the Grammy Awards

Lil Wayne, Nicki Minaj and Tyga on the Red Carpet 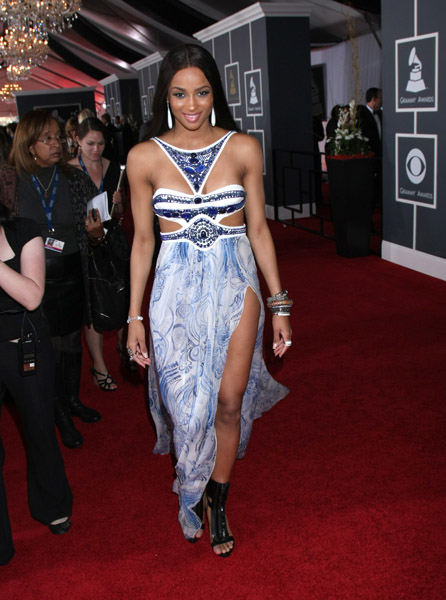 Young Money femcee Nicki Minaj just arrived on the red carpet for the 53rd annual Grammy Awards. She was styling on them hoes in a leopard print outfit designed by Givenchy. Peep Nicki’s hair-do, it matches her outfit.

Comments Off on Grammy Awards Red Carpet: Nicki Minaj Styling On Them Hoes In A Leopard Print outfit designed by Givenchy

Before the actual Grammy Awards, the Grammy’s gave out several awards. So far, Jay-Z leads the pack with three trophies while Eminem takes home one.

Comments Off on Breaking News: Jay-Z Wins Three Grammy Awards At The Pre-Show

Last night was the Young Money Cash Money Billion’s(YMCMB) Pre-Grammy Party in West Hollywood. Lil Wanye, Baby, Slime, Nicki Minaj, Drake, Lil Twist, Mack Maine, Shantell and others were there celebrating with the YMCMB family. The biggest moment of the night was when the label presented Nicki Mianj with her platinum plaque for her debut LP Pink Friday. Peep the pictures above and below.

NEXT PAGE: MORE PICTURES FROM THE YMCMB PRE-GRAMMY PARTY

END_OF_DOCUMENT_TOKEN_TO_BE_REPLACED

Once again, Nicki Minaj’s Pink Friday album has reached platinum status, selling over one-million copies. Just a few minutes ago, Nicki took to her Twitter account @NickiMinaj to Twitpic a picture of her platinum plaque.

Also Nicki holds the #1 spot on Billboard charts. According to the Nielsen SoundScan report, last week Pink Friday moved another 45,300 copies. After 11 weeks of Nicki’s album being on shelves, Pink Friday has sold 1,034,600 copies. This is the first time since Eve’s 1999 debut, Let There Be Eve…Ruff Ryders First Lady that a female Hip Hop artist has had the #1 album in the country.

Honestly, I’m tired of Lil Kim dissin Nicki Minaj. I am not a fan of Nicki’s but Kim keep dissing her isn’t doing anything to better her career. Kim said what she had to say now I think it’s time to let it rest. We all know that Kim is the second greatest female rapper to ever do it. Lauryn Hill is the first. Tomorrow Monday (February 14) Lil Kim will be releasing her new mixtape Black Friday. The Queen Bee has just released a new freestyle over Nicki Minaj’s “Did It On ‘Em”. In kim’s freestyle, she took some more shots at the Young Money femcee.

“All these bitches is my pets, I keep a tight leash around they neck/ bitches try to bite, take their a** to the vet, put em right to sleep like they popped a Xanex.”

Listen to the snippet below. The full song will be out at midnight.

Comments Off on Snippet: Lil Kim “Warning” (Did It On ‘Em’ Freestyle) Dissin Nicki Minaj

A lot of star are in California getting ready for the Grammy Awards, which will broadcast tonight at 8pm on CBS. Last night Saturday (February 12) the 53rd Annual Grammy Awards  had a “Salute To Icons Honoring David Geffen” party. The event took place at The Beverly Hills Hotel in Beverly Hills, CA. Clive Davis also threw his “Pre-Grammy” party. Above and below are a few of the celebrities who attended.

END_OF_DOCUMENT_TOKEN_TO_BE_REPLACED

Maybach Music Group new signee Meek Millz has been going hard since Rick Ross announced his signing to MMG. The Philly native is showing no signs of slowing down. Meek took it back to the “City of Brotherly Love” and stopped by Philadelphia’s Power 99 FM and freestyle live on-air for eight minutes straight. Meek went in, he’s dope! Listen to Meek freestyle below.