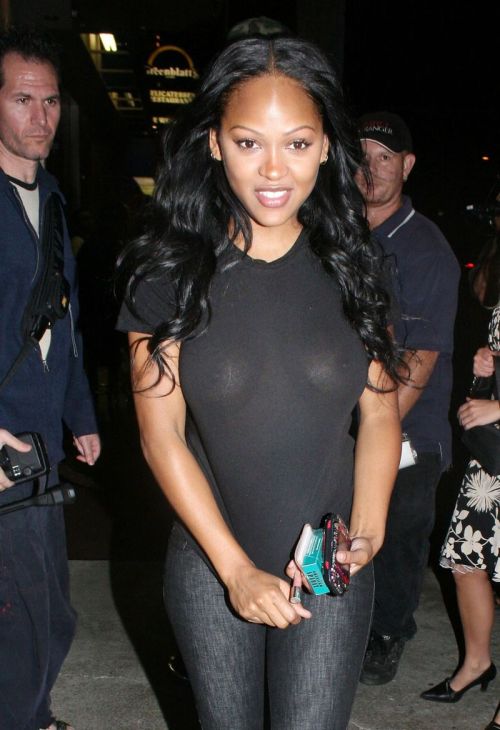 The beautiful Meagan Good will be releasing her upcoming film Video Girl this summer. Meagan who produced the film, will play a girl by the name of Laurie Walker, who has aspirations of being a Hollywood actress and dream of being in the limelight.  After meeting a man who says he will help her be famous, she becomes one of the most highly paid and most sought after video vixens in the game. Read Meagan’s interview with Vibe below:

VIBE: Right now, I think people want to know where are you with your film career.
Meagan Good: I just produced a film that should be out by the end of the year calledVideo Girl. It’s very much like Gia––the HBO film Angelina Jolie did for HBO. It’s not the Karrine Steffans story. It’s about a very unassuming girl from a small town who used to be a professional dancer until she gets a knee injury. So she’s in a place where she’s trying to figure out what she wants to do professionally. She gets hooked into the video-modeling world, develops a drug habit and really gets caught up in the limelight.

Now I’ve heard about Video Girl for some years now. Is this your brainchild or was it brought to you?
This project was brought to me about seven years ago. We’ve had it everywhere––with Queen Latifah’s company, Benny Medina’s, a lot of different people. What I think the script needed was for me to sit down, go through it and figure out which story I wanted to tell. I really wanted to bring hip-hop culture into it but I didn’t want it to be limited to just one audience, so [I had] to mix up the cast and make sure it was multi-racial. I think we did a good job. For what I wanted to come across which is kind of a cautionary tale for young women, letting them know it’s ok to go out there and be successful and make your money but you’ve gotta understand it’s not about the glitz and glamour. It’s about not selling yourself short and being true to yourself.

What made you decide to try your hand at producing?
I just hit this season where a lot of the stuff that was coming to me was not what I wanted to do. I felt like I was playing the same characters over and over. So I kind of took a break, in a sense, and started doing different genres of movies. I did a couple horror movies; I didThe Love Guru with Mike Meyers, JustinTimberlake and Jessica Alba. So in the middle of those projects is when I really got to sit down and revamp Video Girl, get funding.

I first interviewed you almost seven years ago right after you starred in 50 Cent’s “21 Questions” video and now you have this new movie called Video Girl. Pretty interesting.
Yeah, I really feel like my calling in life is to mentor young ladies. I’ve been through a lot. I’ve seen a whole lot from a very young age and luckily I have a mother who’s open-minded and understanding. Who knew how to be a mom when it was appropriate and how to be a friend when it was appropriate. It’s because of her that I’ve dodged a lot of pitfalls. So one of the things I think God really wants me to do is make films that speak to young women without preaching but giving real knowledge.

You have a knack for taking a very sexy character and carving out an edge to them. Is that usually your intention or does that just come out with your performance?
I like to dig that out of my character because I feel that it’s a blessing that anyone thinks you’re attractive, but at the same token people can think that’s all you’re good for so every character that I get I look where I can dig into them deeper to bring out that edge, something to make ‘em memorable. I try to find a lot more than what’s on the page.

re you comfortable being a sex symbol?
Um, on screen I am to a certain extent. I think it’s important for women to feel empowered and to love themselves. I grew up super nerdy, super skinny, buckteeth, big ole afro and yet I had a sense of confidence about myself, like, ‘they just don’t get it yet.’

What current song would you have considered being the leading lady for its video?
I would have loved to have done Usher’s “Oh My God.” It just seems like it would be so much fun. I didn’t even know it was him when I first heard it.

There are a ton of very capable African-American actors in Hollywood––you being one. With all this talent why is there a deficiency of quality roles for black actors?
I think racism is definitely very much alive. When [Hollywood writers] write a fantastic script for a leading lady they don’t say “Let’s get Joy Bryant or Meagan Good.” They say “Let’s get Naomi Watts or Hillary Duff.” It’s unfortunate but at the same token as a black woman it gives me so much to fight for. It makes me want to create movies for the young girls coming behind me that are gonna work just as hard as me and are gonna have just as few opportunities. We deserve our Monster or our Little Miss Sunshine.

Do you see Tyler Perry as helpful or a detriment to this problem?
I see him as a help to it. I think he’s creating a lot more opportunities for us. I think a lot of his movies have a lot of truth to them. I’ve heard other things that people have said and I don’t think they realize how many jobs he’s creating; that his movies are quality movies and they’re entertaining and funny. There’s also a spiritual message to his movies. He’ll continue to evolve. I think people are so quick to hate and run to the finish line with what they think of him as an artist.

Now you’ve done it all from the mainstream blockbuster, the big blackbuster, low-budget flick, indie noir etc. So what is Meagan Good’s defining role?
Well it was to do Aaliyah’s life story but I’m thinking I’m getting to an age where I may be able to pull it off but…when she came out she was 15-years-old and whoever plays her I think should play her from 15 to age 22. Now I have my eye set on somebody else but when I talk about it I feel like I gives people the opportunity to give negativity to it so I’ll keep it to myself until it becomes closer to a reality. It is someone’s life story who is iconic in this day and age and has a crazy amazing life story. —Bonsu Thompson