Partying In St. Tropez: Ciara Performs & Party It Up At The VIP Room 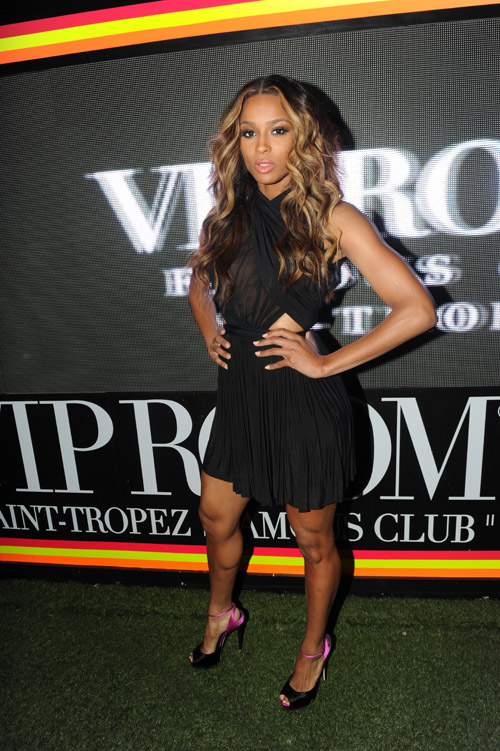 The talented Ciara was spotted performing and partying at the VIP Room in St. Tropez, France. St. Tropez is located on the French Riviera, and it is known today for its famous and extremely wealthy summertime guests. It has been dubbed the ‘playground to jetsetters, fashion models, and millionaires’, and it is most-enduringly known as the place where the iconic Brigitte Bardot was “discovered” and for its role in the liberation of southern France during World War II (Source). While in France, Ci Ci spoke to This Day Live, and spoke on if she would be joining L.A. Reid over at Epic Records, traveling overseas, performing, as well as her excitement for her closest friends Monica, Lala and Kim Kardashian’s weddings and whether they’ve inspired her to ‘tie the knot’. Below are some excerpts:

There are reports that L.A. Reid joined Epic Label Group and that you were going to be an artist under his roster. Can you confirm that?

I don’t even know what you’re talking about [laughs]. Nah, I’m totally just playing. I think you have to ask L.A. kinda what’s going on. I can’t really comment on what’s happening and the system. I can’t really say too much. I don’t really know too much about the breakdown of everything.

Recently you’ve been in the news for attending the wedding of your friend, R&B singer Monica. Another friend of yours, Kim Kardashian, is set to wed as well. How do you feel at this point in your life being 25 and possibly taking a similar step soon?

Whenever you see any woman, in particularly your friends and family that are really close to you, get to have that moment in their lives, I get so excited for them. The way that I look at it, I come from a background of marriage. My grandparents were married for 51 years now, it is. My mother and father are going on 30 years, so that’s something that’s very traditional within my family. The way that I look at it, I’m so lost in the zone right now of what I’m doing that when that happens in my life, I believe that it’ll happen at the perfect time. You can’t put a time marker on anything like that and you can’t say exactly when you want to do it; it just kinda falls in place. That’s something I definitely look forward to because in my career, you do sacrifice a lot by just putting so much time and effort into it, but I do believe when that moment happens it’s going to be amazing. I have a whole breakdown of how I see it. I’m not rushing the idea of it.

That part is so emotional, like I cried when I saw La [La] get married, and even when I saw Monica. I’ve known Monica for years, like she’s my family to me. And of course, La La is my best, best friend so it’s really cool. And then for Kim, it’s always great to see a woman experience a moment like that in their lives.

Comments Off on Partying In St. Tropez: Ciara Performs & Party It Up At The VIP Room

Tagged as Ciara, Partying In St. Tropez: Ciara Performs & Party It Up At The VIP Room