Last night Friday (July 29) Lil’ Wayne’s “I Am Music 2″ tour stopped at the Susquehanna Bank Center in Camden, New Jersey.  Weezy, Rozay,Keri Hilson, Lloyd and Far East Moment shut down the stage. They all performed some of their most popular hits.  Tonight Saturday (July 30), the tour will stop at the Farm Bureau Live in Virgina Beach. Peep the pictures below: 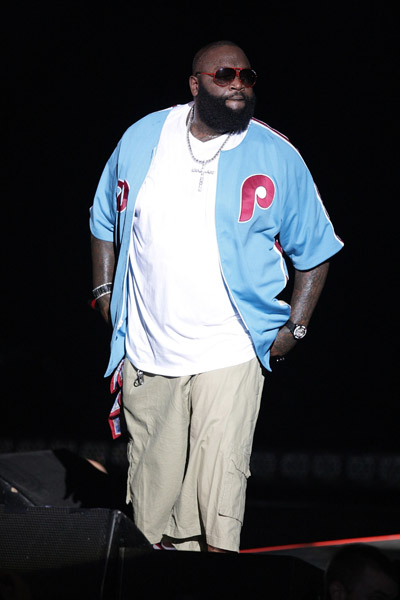 NEXT PAGE: MORE PICTURES FROM LIL WAYNE’S “I AM MUSIC 2”  TOUR IN NEW JERSEY

END_OF_DOCUMENT_TOKEN_TO_BE_REPLACED

Comments Off on Performing In Dirty Jerz: Lil’ Wayne, Rick Ross, Keri Hilson & Lloyd Rock Out On “I Am Music 2” Tour [PICTORIAL]

The Fall/Winter 2011 Balenciaga Sneakers are now available. As of now, its site only has the red and black colorways. These sneakers feature a rubber outer sole, with the Balenciaga logo on the tongue. The fabric is soft lambskin and the lining is foam. They retail for $ 545. You can order these sneakers online at Balenciaga official site.

While performing on the “I Am Music Tour 2” tour in Camden, New Jersey Rick Ross and Meek Mill crossed the Ben Franklin bridge and stopped by Philly’s Power 99 to do an interview with DJ Cosmic Kev. During the interview, Ross said the remix to “Imma Boss” will feature Jay-Z, Diddy, Swizz Beatz and Birdman. Mill new mixtape Dream Chasers will be dropping August 11th. Peep the video below:

I’m hearing from a very reliable source that XXL magazine next issue will feature an entire spread on Brooklyn’s rapper Papoose and his incarcerated wife Remy Ma. XXL went to the jail with Papoose to interview himself and Remy Ma. Back in February, Remy Ma appeal was denied. The court denied her argument that a judge didn’t properly inform jurors before they announced her guilty verdict. Remy is currently serving eight years in prison for criminal possession of a weapon and two counts of assault stemming from the struggle in which a friend was shot, back in 2007. Papoose just formed a new record label named Honor B4 Money Records; his highly anticipated debut album Nacirema Dream, will be dropping soon.
Follow me @donbleek88

Comments Off on DON BLEEK EXCLUSIVE: XXL Magazine Is Doing An Entire Spread On Remy & Papoose

DON BLEEK Interviews Lyonel “Kay K” Rosemond, One Of The Most Powerful A&R’s In The Music Business

Lyonel “Kay K” Rosemond is one of the most powerful A&R’s in the music business. He was just a regular kid from the Brownsville section of Brooklyn, New York; who was told that he would never amount to nothing. Now, over a decade in the game, he has six Grammy nominations, a Visionary Of The Year award and a B.E.T. Award. I caught up with Kay K at Universal Motown Record office In NYC for an exclusive interview.

I read in your bio that you went to school for cartoon illustration, but in 1994 you seen another career path when you were approached by your uncle Jimmy Henchman Rosemond, who was about to start his own management company during that time. Can you describe that moment and what it was like to make a transition from a cartoonist to working in the music industry?

Kay K: In 1994, I graduated ahead of the class, I went to Art & Design and I was trying to figure out, the usual teenager goes to college once they get out of high school but I was never really interested in stuff like that. Even though I did go but I was introduced young. From the very first wall he knocked down in his office and turned it to a studio. It was one morning he came and picked me up to hang out at a video shoot. I was like, “man I don’t know anything about music.” He was like, “you should just come to hang alone.” That same day I met Biggie, Lil Kim, Lil Cease and I’ve seen the music and how hyped everyone was around it.

Do you remember which video shoot it was?

Kay K: Yeah, it was Groove Dirty video shoot, for a song called “Tell Me” or something like that. It was early 90’s. Everyone was there, it was early Hip-Hop. Raw and uncut, everyone was just vibing and listening to music. Everyone came in and out of that place. Trech, Naughty By Nature, Big, Cease, Kim, AZ, and Nas. I was like “wow.” I was just a 16 years old kid bumping into guys I see on TV.

Kay K: It was still early Big. He was still rough around the edges like that but he was funny. He was a great guy.

You just said, “It was early Hip-Hop,” Right now Hip-Hop isn’t the same way it was during the early 90’s, why do you think it’s not the same anymore?

Kay K: Well, I have a bunch of things to say about that. It has declined a lot because of record sells. A lot of things has come into place. We now have ITunes; you can download any mixtape or album earlier then when you’re supposed to get it. In the 90’s you actually had to go out and be a consumer. Now everything is at you figure tips. You can get damn near all the music off the computer.

NEXT PAGE: KEEP READING FOR THE REST OF MY INTERVIEW WITH KAY K

END_OF_DOCUMENT_TOKEN_TO_BE_REPLACED

Comments Off on DON BLEEK Interviews Lyonel “Kay K” Rosemond, One Of The Most Powerful A&R’s In The Music Business

Tagged as DON BLEEK Interviews Lyonel “Kay K” Rosemond One Of The Most Powerful A&R’s In The Music Business, Lyonel "Kay K" Rosemond

This past Monday (July 25), Def Jam rapper Young Jeezy celebrated the six-year anniversary of his debut album Thug Motivation 101, at the Highline Ballroom in NYC. During the end of Jeezy’s show, he announced that his new album Thug Motivation 103 will be out September 20. In a recent interview with MTV, Jeezy talked about how the economic decline and the words of Tupac influenced his upcoming album. I like how Jeezy mixes politics with street music.

On when he dropped TM 101 money was so plentiful.

On TM 103 and maintaining the money he has.

On Tupac’s words and music influencing his new album.

“It’s about knowing what to do. When I was growin’ up and I was listening to ‘Pac, all his situations apply to me today,” he noted. “I never knew that, I was just listening to the music and I thought it was good music. Everything that he said applies to me today. Keep your enemies close, money over bitches – that’s real talk.”

Comments Off on TM103: Young Jeezy Says His New Album Is Influenced By The Economic Decline & Tupac

Philly’s own Meek Millz released the second part of his three-part series “The Dream Chaser,” which is a documentary about his life. In part 2, Mill talked about growing up in North Philly, described the steps that it took for him to get to where he’s at and being influenced by Cassidy and Beanie Sigel. This segment also feature an appearance from his label mate Pill. Watch part 1 here. Check part 2 below:

What Meek Mill is doing for Philly is unbelievable. I’m proud of his success. Congratulation to Meek and much success in your future endeavors.