Back in 1998, platinum-selling rapper DMX, record producer Irv Gotti and music mogul Jay-Z were spotted inside of Sony Studios in NYC. This was considered the Golden Years of Hip-Hop. DMX is currently touring the states and is in the studio working on his comeback album. Jay-Z will be embarking on a United State “The Throne” tour with Kanye West, this Fall. As far as Irv Gotti, I haven’t heard anything about him lately. In the past, he produced  DMX’s “What’s My Name?,” Jay-Z’s “Can I Get A…”, and Ja Rule’s “Holla Holla”.

International superstar Ciara had the paparazzi flicking their cameras as the Atlanta native made her way to the Barbara Bui show during Paris Fashion Week.

Ashanti was spotted walking the streets of NYC, all glammed-up, as she made her way to the “Today” show on Thursday (September 29).

Earlier in the week, singer Keri Hilson made an appearance at Raspoutine Nightclub in Paris.

Comments Off on Ladies On The Scene: Ciara, Ashanti & Keri Hilson Making Their Rounds

This past Wednesday (September 28), rapper Young Jeezy celebrated his birthday with an upscale dinner at Frank Ski’s Restaraunt & Lounge in Atlanta. Celebrities such as Ludacris, Brain Michael Cox, Big Boi, Ne-Yo and Jermaine Dupri all attended Jeezy’s birthday dinner. The Atlanta native was styling on them lames in a red Louis Vuitton pullover sweater hoodie and a pair of Louis Vuitton Tibet nubuck leather ankle boots, both from the Fall 2011 Collection. Next week, Jeezy will be announcing the official date from the release of his upcoming LP Thug Motivation 103. 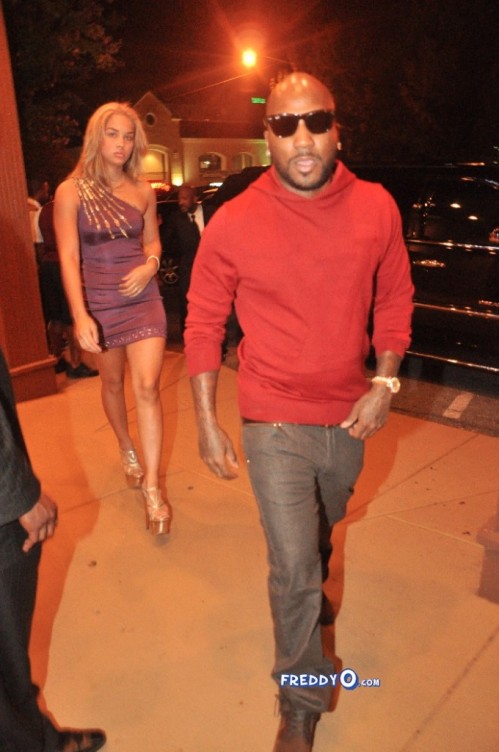 Comments Off on Styling On Them Lames: Young Jeezy Rocking A Louis Vuitton Hoodie & Ankle Boots

YMCMB rapper Lil Wayne is covering the October/November issue of Vibe magazine. In the cover story, the New Orleans native talked about his competition, taking shots at Jay-Z, Drake being his competition and much more. The platinum-selling rapper latest album Tha Carter 4 was released back in August and sold almost one-million copies in the first week. Weezy also feel that there won’t be any repercussions behind what he said about Jay-Z. This issue also feature stories from Meek Mill, J. Cole, Pusha T, Common and other artists. Below are some excerpts:

WAYNE ON JAY-Z AND “THE OLD GUYS”

VIBE: You say competition is for the “old guys,” but it sounds like you’re going at Jay-Z with that line, “I got your baby money/Kidnap your bitch, get that how-much-you-love-your-lady money.” Are we looking at it the wrong way?

VIBE: So you knew the repercussions of going after Jay before anything even happened?

WAYNE ON LOOKING AT DRAKE AS COMPETITION:

VIBE: You mentioned how humbled you were at the success of “She Will.” Drake, who wrote and performs the song’s chorus, has now become a platinum star in his own right. Do you look at the guy and say, “Wow, I helped create a monster, I have to stay on my toes”?

LIL WAYNE: I don’t look at it like that. Drake is my artist. If he wasn’t my artist, then yeah maybe. But that’s my artist. He’s not [just] a friend. We’re more than friends. It’s business. It would be impossible for it to be a competition. I mean, I’m the guy’s boss.