Tyler, The Creator Speaks On Odd Future Being Compared To Wu Tang Clan, “No we’re not! I don’t even fucking listen to Wu-Tang.” 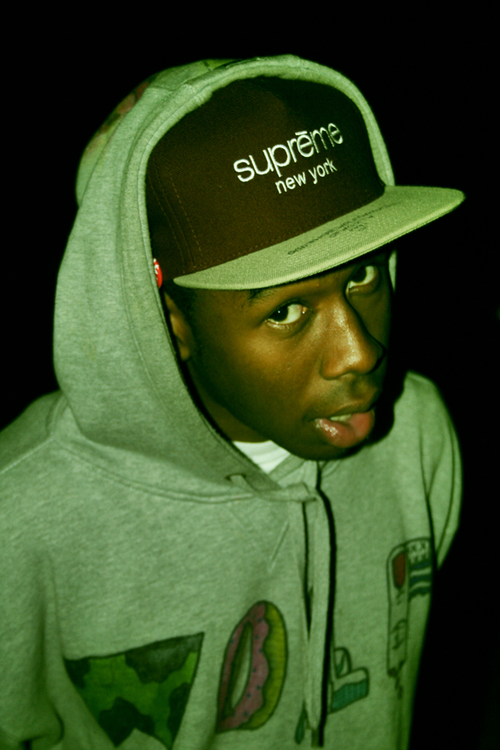 Last month, Spin magazine caught up with Controversial rapper Tyler, the Creator for an over the phone interview, while he was touring across the Pacific Northwest with his group-mates Odd Future. As always, this 20-year-old kid interview turned into jokes, dirty language, and copious clowning on everyone on the bus. During his interview, Tyler, the Creator talked about journalists writing positive and negative stories on him, staying grounded and Odd Future being compared to 90’s Hip-Hop group Wu Tang Clan and more. Below are a few excerpts:

A lot of people writing both good and bad things about you are, like, thirtysomething white men.
Sometimes it could be weird, ’cause they’re journalists, but I don’t know. I read an article on the Pitchfork Fest my manager showed me where he was just talking down on me. I had a cast on, the writer was like, “It’s just like any other wack show. Let’s be honest. They just jump in the crowd and kids go crazy, it’s nothing that you guys are missing.”

But it’s age that makes a big difference. Like fresh out of high school. Those kids relate to me because I’m just like them. He doesn’t relate to me because he’s not like us. So it’s a whole different mindset. He doesn’t have the audacity to call anything stupid because I mean something to someone. Like the kid that got OF tatted on him, from the SF show. Some people might call him stupid as fuck, but to him, that shit actually means something to him. You never know, he might have listened to my music and his fucking mom died and shit, and he got that just to remind him that my music got him fucking through. So it weirds me out when there’s people like that, who can’t relate under any circumstances, writing. But then again, some [writers] just like it, so I’m kinda 50/50 on shit like that.

How do you feel like you stay grounded?
I bring Lucas, we hang out at home, we skate around and shit. I watch TV, play Xbox, do shit that I did already. Fuck with people, I like fucking with people so much. I’m running a business. I’m on tour, I got a family I got to look out for. I got a fucking book coming out, I gotta work on my next album, still touring off my last album, I still have to design the next batch of merch. I just have so much and I’m 20 years old, when most people have to worry about their next term paper. It’s a lot to fuckin’ handle. I wrote “Tron Cat” on my birthday when I turned 19 last March. And it’s just weird to know that now I can stop the end of a verse and hear the whole crowd singing it? As much as I hate performing “Yonkers,” when there’s kids there and I hear the whole crowd go crazy? I look at Clancy and see the smile on his face and it’s the greatest feeling. ‘Cause I made that beat as a joke, like shitty New York ’90s something. I don’t really listen to rap, I just like to rap. So people were saying OF is like the new Wu-Tang. No we’re not! I don’t even fucking listen to Wu-Tang. I want be compared to shit I listen to. So fuck, I’ll just make a New York beat to show them. Come to find out that was the hit song so far.

NEXT PAGE: MORE EXCERPTS FROM TYLER, THE CREATOR INTERVIEW WITH SPIN

So, we have to ask the real shit…
Truthfully, I’m just having fun. I’m young, and when you’re young you just find things that interest you. Like skateboarding, I like that shit. I read books on serial killers and rape and shit so my mind is just filled with that at the moment. I’m not a fucking serial killer. I just rap about that shit because it interests me at the moment. I’m just having fun… So if you take it seriously, you’re either old as fuck, or didn’t have good childhoods and take life too serious. If you have time to sit there and write articles about me and you’re not doing shit… Some people just really sit there and take shit too fucking serious. You can’t please everyone.

A lot of your music, especially the earlier stuff, gives off the vibe that you’re really depressed.
That shit’s true, I was depressed as fuck last year. And there’s still shit when I’m alone in this room and I think about that just tears me the fuck up. It’s just that I’m in a better mindset now. I don’t sleep on the couch anymore. Most of those songs, I moved into the fucking house that I have now in May, after Goblindropped. So that line I said on Domo’s shit [“Whole City Behind Us”], like “Goblin was a disappointment / Yeah right / Shit dropped / I bought a house that night.” That shit’s real. I said that because I was getting so much flack because everyone had so many high expectations because of the way “Yonkers” sounded, butGoblin didn’t sound like that. You have the song “Her,” which I’m spilling my fucking heart out about a girl that broke my fucking heart, and it didn’t have any snares, it was just some softcore porn synth shit. And then the “AU79” track, like I love jazz. People who had high expectations for “Yonkers” sounding like some old school hip-hop niggas rapping, didn’t really fuck with that shit on there and was actually disappointed.

But it wasn’t a disappointment for me, I put out an album I liked, I finally got my mom and my sister a fucking home, I put a lotta niggas on my team on my back. Off that album, the success that it got. I’m buying fucking expensive lotion [points to lotion] that they stopped making in 2009, and you have to get it off eBay for 40 and 50 bucks. I like the way it smells, it’s like baby lotion.

Read the entire interview over at Spin.com.

Comments Off on Tyler, The Creator Speaks On Odd Future Being Compared To Wu Tang Clan, “No we’re not! I don’t even fucking listen to Wu-Tang.”

Tagged as Tyler the Creator, Tyler The Creator Speaks On Odd Future Being Compared To Wu Tang Clan "No we're not! I don't even fucking listen to Wu-Tang."