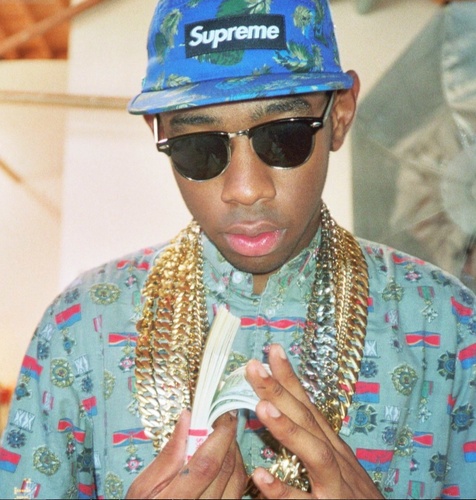 Taking pictures and shooting visuals are two hobbies of Tyler, the Creator. 2011 was a great year for the Odd Future leader. He won “Best New Artist” at the 2011 MTV Awards. Over the past year, I grew to like this Cali native. The Fader caught with Tyler, the Creator. In the interview, he talked  about his passion for films, visuals, books and starting a punk band. Below are some excerpts:

On if he like working with visuals more than music. I can’t choose anymore. When people ask whether I like making the video to a song or making a song to the video that’s in my head, I don’t know, I can’t choose between either one because they go hand-in-hand. They need each other.

On starting a punk band. I’m in a punk band. It’s called Odd Future. But I really wanna be in a [rock] band. Rock bands are way cooler than rappers, in general. When people make end of the year lists, I wanna be near Trash Talk and The Strokes or some shit instead of fucking rappers that’s up-and-coming. I hate that shit. That shit sucks.

On what kind of other books are you into? I have a collection of shit at my house. VICE . I have a lot of those. Skateboard, Thrasher. I have a lot of Thrashers. Other random magazines from Europe because I like the covers. I was into Goosebumps really heavy when I was younger.