Rapper/MMG CEO Rick Ross and Miami’s DJ, DJ Khaled were recently photo’d chillin in the back seat of a Maybach. Later that evening, Ross was spotted in V.I.P at a nightclub. Rozay recently declared himself the “Biggest Artist in the Game.” A video for his new single “MMG Untouchable,” which is featured on his latest mixtape, entitled Rich Forever was shot last week. The video was Shot by Dre Films. God Forgives, I Don’t coming soon. DJ Khaled is also in the studio working on a new album. 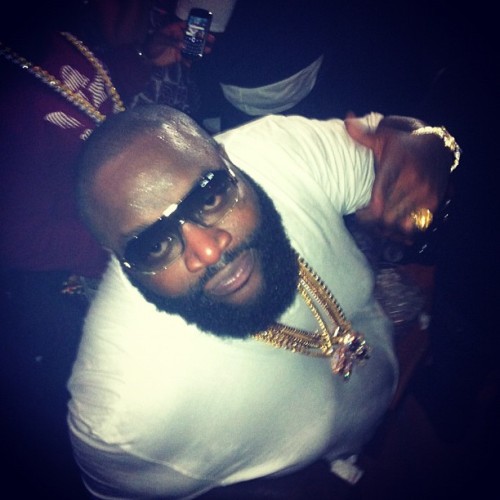 Comments Off on The Good Life: Rick Ross & DJ Khaled Chillin In A Maybach

This past weekend, R&B singer/actress Brandy attended Cirque Du Soleil’s premiere of Michael Jackson, The Immortal Tour in Los Angeles. “The Immortal Tour” will make rounds throughout the states this year. While on the red carpet, the Grammy Award winning singer was all glammed up in a $1295 Burberry Prorsum Beaded Brogue Epaulette Shirt. She paired her outfit with some daisy dunks and a pair of Christian Louboutin Dafreak Pumps, which are from the Spring/Summer 2012 Collection. Are you feeling Brandy’s outfit? 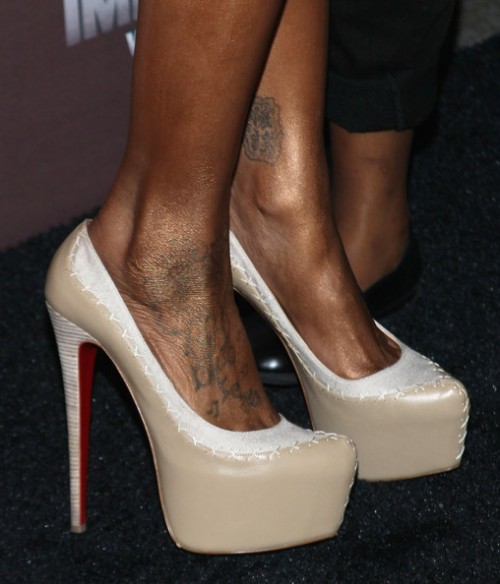 Comments Off on Styling On Them Hoes: Singer Brandy In Christian Louboutin Dafreak Pumps

Nicki Minaj is covering the February/March 2012 issue of Wonderland magazine, shot by Matt Irwin. Minaj will release her new album Pink Friday: Roman Reloaded on April 3rd. Last week, the official video for “Stupid H*e” premiered. Another single “Roman in Moscow” is buzzing on urban radio stations across the country. Minaj is also performing at the 54th Annual Grammy Awards. The show is hosted by Hip-Hop legend LL Cool J and will be held on February 12th at the Staples Center in Los Angeles. Broadcast on CBS at 8:00 p.m. ET.

Last week, rapper and fashion designer Kanye West has been touring in Australia. Yeezy was spotted on stage wearing a cut-off sleeve Celine shirt and a Treated snapback hat. The long-sleeve silk shirt is from Celine’s spring/summer 2011 collection. The Treated snapback is from Chicago native Million $ Mano. Peep the pictures below: 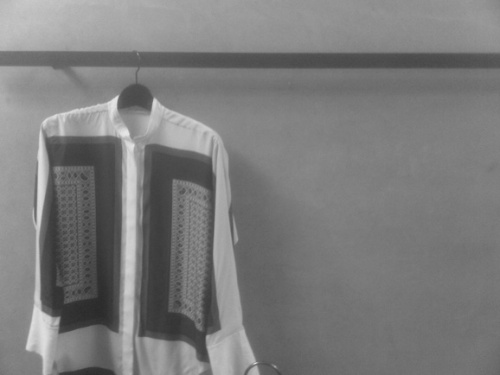 Fresh off tour and performing for a sold-out crowd at New York’s SOB’s, 2 Chainz (formerly known as Tity Boi) revealed to XXL that he parted ways with Ludacris’ DTP Records and is now signed to Def Jam. If you follow me on Twitter @donbleek88, you probably came across my week last week, saying “2 Chainz just signed to Def Jam.” I attended the concert last night and his set was shorter than expected. Raekwon was in the building and so were a lot of Def Jam execs. Below is what 2 Chainz told XXL:

“It’s the Real University, Two Gun Gang, Street Executives. It’s not DTP no more,” he says. “I’m actually behind [Ludacris], he’s still my homie. I just took another route as far as running my own company and bossing up. But on the other hand, I’m still working with him. He has an album coming out this year, as well. Matter of fact, we are label mates, now, which is crazy. So, yeah, that’ll be cool. I’m looking forward to that.”

Congrats to the homie 2 Chainz and much success in all your future endeavors. 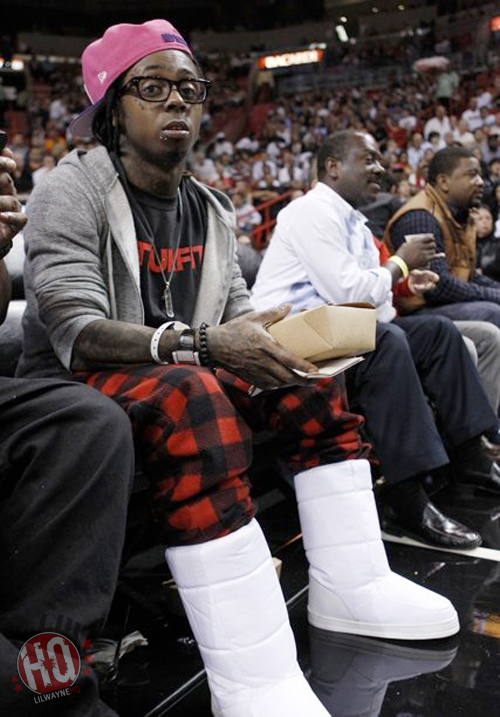 Over this past weekend, rapper Lil Wayne attended the Miami Heat vs. New York Knicks game at the American Airlines Arena in Florida. The final score was 99-89, in favor of the Heat. Weezy was spotted sitting court side with Mack Maine. He was rocking a pair of Terrence Koh x Opening Ceremony x Forfex Moonboots. They’re available now at Opening Ceremony for $200. “Terence Koh’s white moon boot combines the softness of a quilted comforter, the daring of an astronaut, and the sole of a pristine white forfex sneaker.” Last month, Lil Wayne debuted his skateboard-inspired clothing line in NYC. The fashion brand, which he named Trukfit is gearing up for a nationwide release at all Zumiez locations later this year. Peep the pictures below: 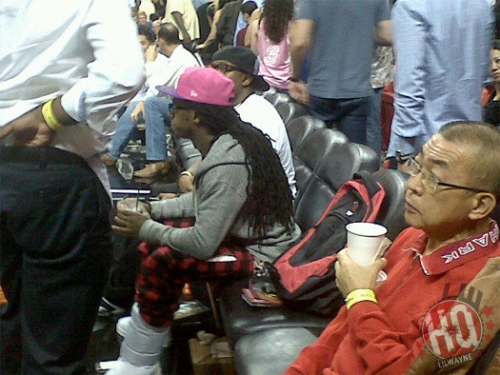 Sorry But He Is Not Responding: Drake Speaks On Common Diss & His Shots at Vanessa Bryant 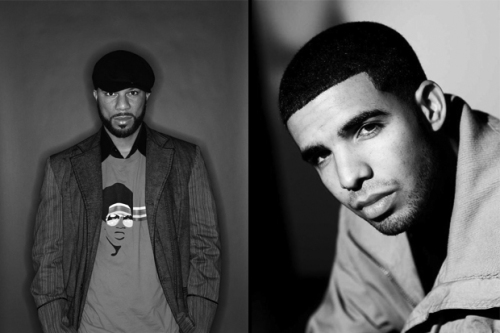 Last year, rapper Common released a song called “Sweet”, a couple of lines from the track were directed toward Drake. Once people realized that Common was dissing Drake, he finally admitted that those shots were in fact aimed at the YMCMB rapper. Drake wasn’t feeling Common’s diss and responded on  Rick Ross’ “Stay Schemin” track.

Nah Right caught up with him while he was on the set of his video for “The Zone” with The Weeknd and they asked him about his lines from “Stay Schemin” and whether we should expect a second Common response. Below are some excerpts:

So people want to know: will you respond to Common?
No. Because despite how it’s been worded by him that situation is not a “hip hop moment” or a “battle for the sake of musical integrity”…it’s a ploy for attention around the release of an album. More than anything it was just disappointing cause what kid isn’t a fan of what Common has done for our genre. A guy who made such an incredible career for himself based off expressing genuine feelings about life and love is now targeting me for sharing my story.

There’s a line from your “Stay Schemin” verse about Kobe’s soon to be ex-wife Vanessa that has gotten some negative attention. Can you speak to what you were trying to express with that line?
That line came from a conversation about being this young and making this much money and the fear of losing it all. I just used his potential situation to address my own life. I never intended to offend Vanessa or anyone else. That line had everything to do with me and what goes on in my head as a 25-year-old man with this much income flowing in. Kobe is and always will be a friend and an icon to me.

Comments Off on Sorry But He Is Not Responding: Drake Speaks On Common Diss & His Shots at Vanessa Bryant

Tagged as common, Drake, Sorry But He Is Not Responding: Drake Speaks On Common Diss & His Shots at Vanessa Bryant

Last week, reality star, actress and media personality La La Vazquez-Anthony was photo’d out in Los Angeles filming a few scenes for her upcoming reality show La La’s Full Court Life, which is scheduled to premiere on VH1 in March. La La is doing a great job at branding herself, I also respect what Vaquez-Anthony does. She is well-spoken, educated and very talented. According, to TheInsider.com, “this season will focus on her journey as she expands her brand, breaks into acting and deals with the drama that comes with fame. Including a disagreement with a close family member that threatens to affect their relationship for good. Sources also tell us there will also be plenty of cameos from her bevy of celeb friends. La La’s Full Court Life is expected to premiere in March of 2012.” I’ll be watching La La’s show, will you? 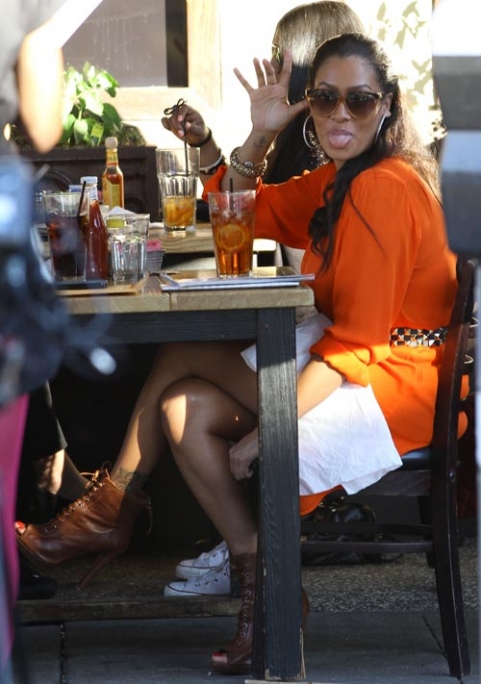 Yesterday Monday (January 30), MMG representer Meek Mill stopped by The Angie Martinez Show on Hot 97 in NYC. Following their interview, Mill dropped a few bars  over Rick Ross’ “Stay Schemin”. The Philly native is in the studio working on his upcoming mixtape, entitled Dream Chasers 2, which is scheduled to drop next month. Mill is one of my favorite new artists. I’m so proud of him. I grew-up watching Mill rap on DVD’s in Philly and to see him live out his dreams is amazing. I wish Mill the best of success in his future endeavors. Watch the video below: