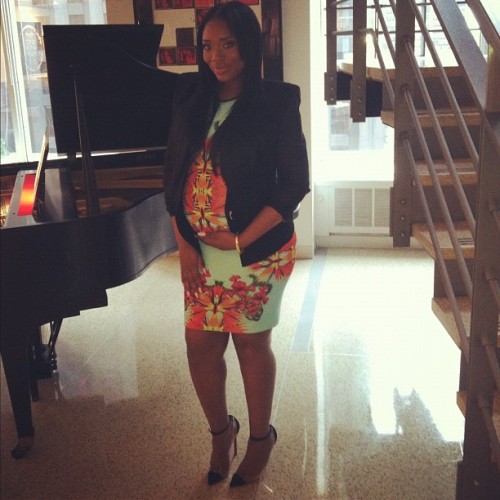 Now we can put all the rumors and speculations to rest. Love & Hip-Hop reality star Yandy Smith finally confirmed her pregnancy. The music & talent manager posted the above picture on Instagram and wrote “You wanted to know now you know!!!! #POW“. In the photo, Yandy was styling on them hoes in a $2,395 Givenchy Floral Print sleeveless dress from the Resort 2012 Collection. Tomorrow Thursday (April 12), Yandy will appear on BETs “106 & Park” with the cast of Life Love Soul as she is an associate producer. 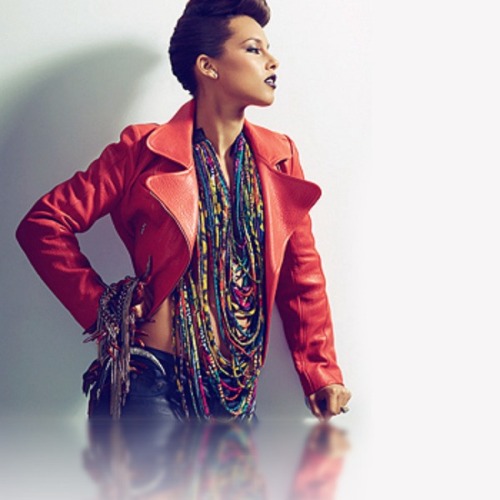 Last week, I reported that singer Alicia Keys is covering VIBE’s 2nd annual Global Issue, which hits newsstands on April 16th. Keys and her husband, music producer Swizz Beatz agreed to be interviewed together over dinner. The interviewer spent a couple of hours with The Deans drinking cocktails. They’ll talk about their partnership in a way that says, “We want the whole world to have what we have,” and they’ll do it by telling you about the moment when they knew they were soul mates. Now the full spread has been released. Check out the spread below: 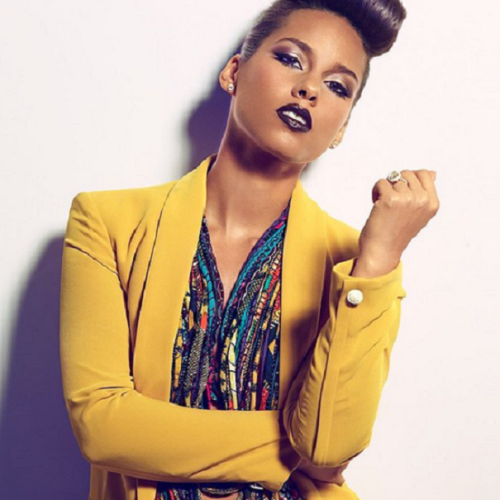 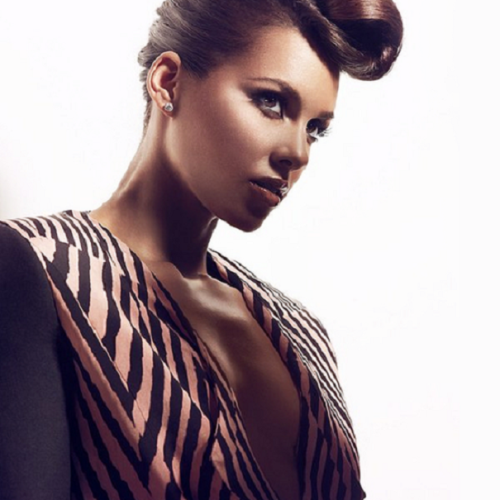 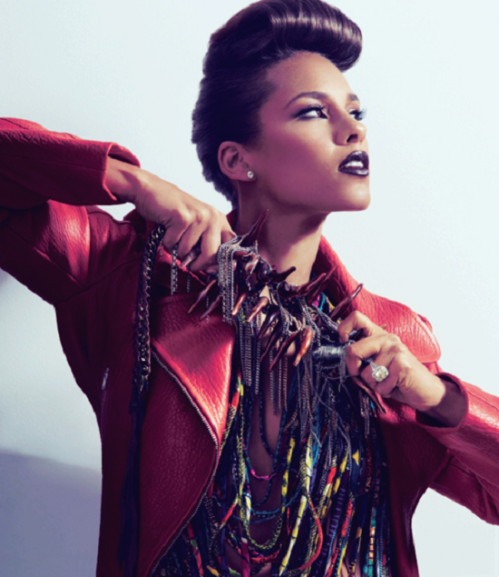 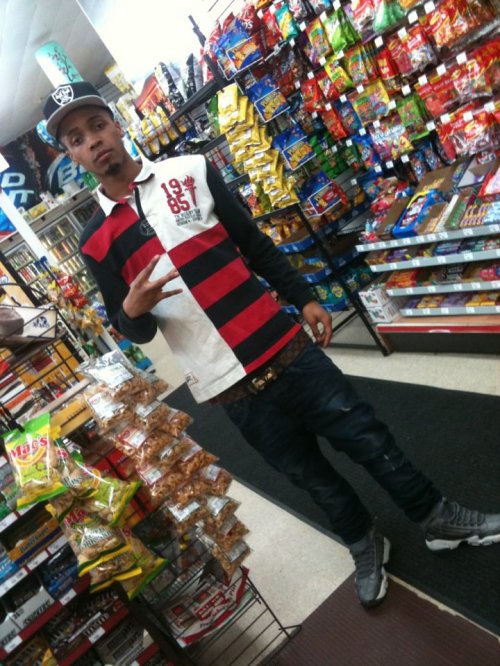 Rap Name: Rich Rozzay
Age: 18
Reppin: Bronx
Who influenced you to rap: Big Pun, Run DMC, Biggie Smalls, Waka Flocka.
Standout records or moments have been: “One Mic”, joining Juelz Santana on stage at B.B. King Blues in NYC, and performing in Brooklyn for the first time.
If you can sign to any label, what label will it be and why: Atlantic Records, because I like the way they promote their artists.
What projects are you currently working on: My debut mixtape, entitled The Interview, dropping May 21.
Five years from now I will be: Signed to a major and putting out that wave.

“Love Me In The Hood”

Jet Skiing In St. Bart: Jay-Z & Beyonce Riding Dirty & Shares Photos Of Themselves On The Side Of The Road

The Carters are still vacaying across the ponds. They have been in St. Bart’s since last week; they spent their 4th wedding anniversary as well as the Easter holiday there. St. Bart is a popular tourist destination during the holiday season. A lot of celebs travel to the island to vacay. Earlier pictures showed Jay and Bey swimming in the beach,  relaxing in the sand, chilling on a private yacht, walking the island and shopping. Yesterday, they decided to hit the water again and this time it was to jet ski. They also were spotted taking pictures of themselves, on the side of the road, with their bodyguard. Peep the photos below: 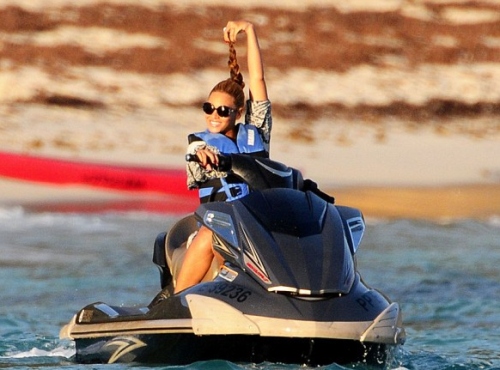 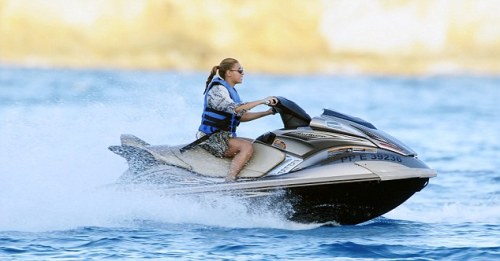 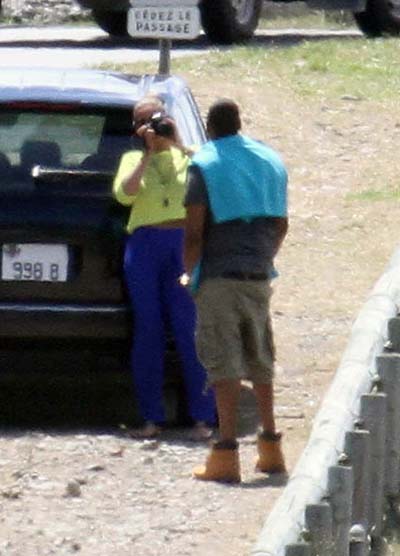 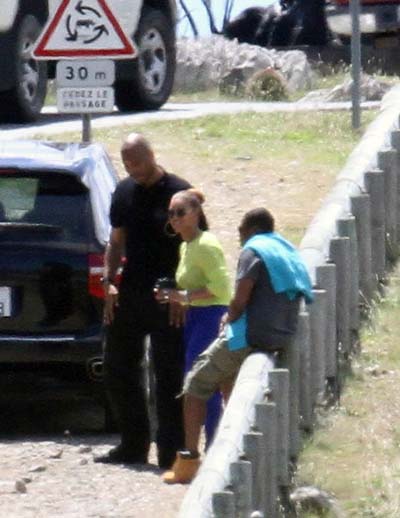 Tagged as Beyonce, Jay-Z, Jet Skiing In St. Bart: Jay-Z & Beyonce Riding Dirty & Shares Photos Of Themselves On The Side Of The Road, St. Bart, The Carters 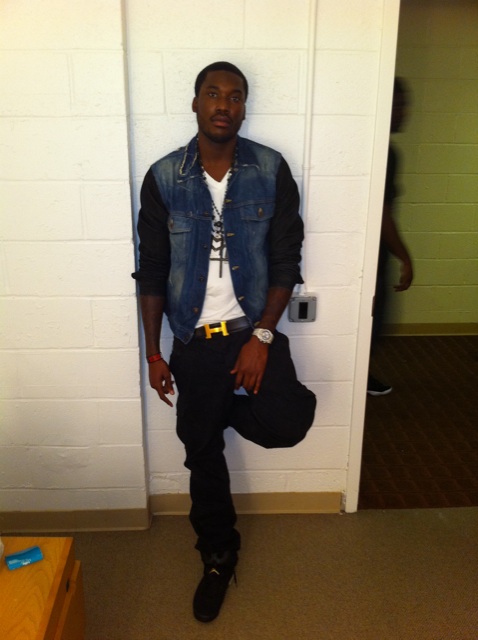 Earlier today, Wednesday (April 11), Hip-Hop site XXL premiered MMG rapper Meek Mill “Faded Too Long” official visual, which was directed by Jon J. of DRE Films/Maybach Films. The song is a freestyle over Drake’s “The Ride”. In the visual, Meek is giving back to his community in Philly by handing out coats, gloves, sneakers and toys to the youth. Dreamchasers 2 will be dropping April 24. Peep the visual below: 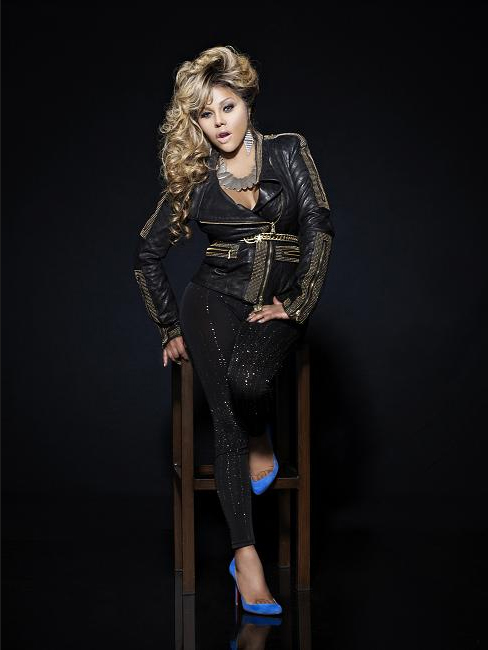 Femcee Lil Kim is still making her promo rounds to promote her new singles “If You Love Me” and “Keys To The City” Ft. Young Jeezy. She is also working on her long-awaited comeback album, book and documentary. The Queen Bee recently called into Chicago’s Tony Sculfield & The Morning Riot Show for a brief interview. During her conversation, she talked about one of her best friends giving birth, her rumored relationship Maino, how her heart goes out to Remy Ma and much more. Below are some excerpts:

On her God Daughter Reign

Is there any truth to the rumors about you and Maino being together?
I plead the fifth. Ask him that when you talk to him.

What does it take for a man to hold down a woman like Lil Kim?
To be honest, he’s got to be financially stable. He’s got to be very spiritual. To me that’s really number one. If he’s got a connection then we can have a connection.

On where she is musically
I got a bunch of singles that we’re getting ready to throw out in a few seconds. We’re going to throw out a few singles first so we can get everybody familiar with my new sound. I have a documentary that I’m going to put out and that’s going to explain a lot of things where people can stop asking me silly questions and stuff like that. When I put the documentary out, a lot of questions will be answered. I still have my book deal with St. Martin’s Press which is solely about my stay in prison.

On what she thinks of other females going to prison like Da Brat and Remy Ma
Let me tell you something, at one point a lot of people in Hip-Hop know Remy Ma and me had a little situation. At this moment right now, anybody in prison my heart goes out to them. If Remy was like, “Yo, I need something..” I’m the type of person that would reach out and help her and when she comes home we don’t have to speak. At the end of the day, I’m very sensitive to women in prison. I don’t feel nobody should want to be there; if you happen to end of there it is what it is. My heart still goes out to her and her family and everybody else because at the end of the day, everybody deals with it differently and I know for me, it wasn’t a physical thing at all with me. It was mainly holidays and the worst holiday was probably Thanksgiving for me.

You had some issues with Biggie Smalls mom Voletta Wallace when the movie ‘Notorious’ released. Have you reached out to her since then how your relationship is now?
Absolutely not. I have absolutely no relationship with that woman at all 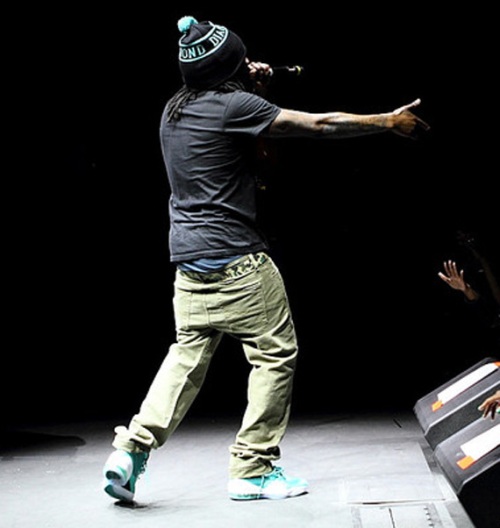 Maybach Music Group’s recording artist Wale recently performed for a sold out crowd at the Howard Theatre. While on stage, Wale rocked a pair of Nike Air Penny V  ‘Miami Dolphins’. These kicks sure are dope and features a Miami-like vibe with the Dolphins-esque colorway. They will be available during the Christmas holiday season 2012 for $150. Wale paired his kicks with a black tee-shirt and relish-color jeans. Any thoughts on these kicks or Wale outfit? 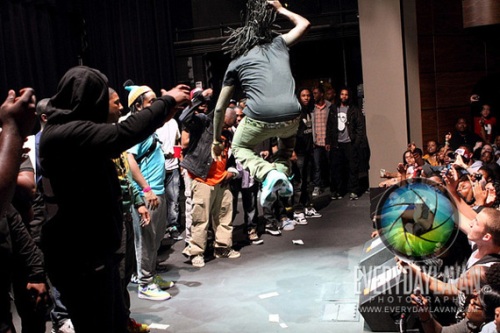 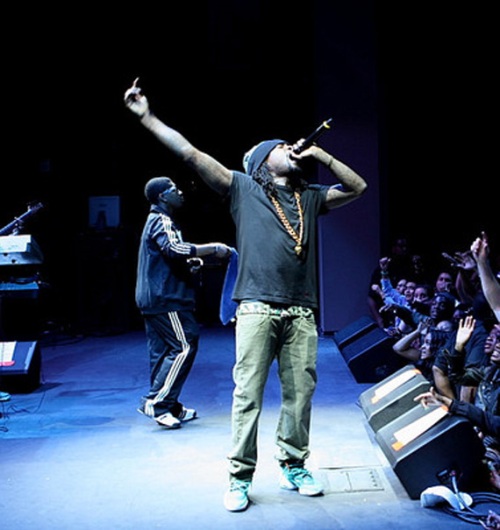 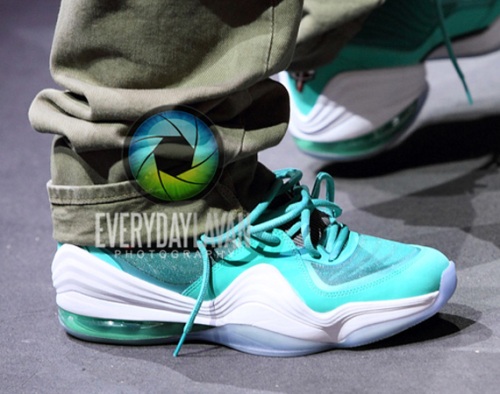 Was She Hit With The Sophomore Jinx? Nicki Minaj New Album Sold 125,000 Copies Less Than Her Debut Disc 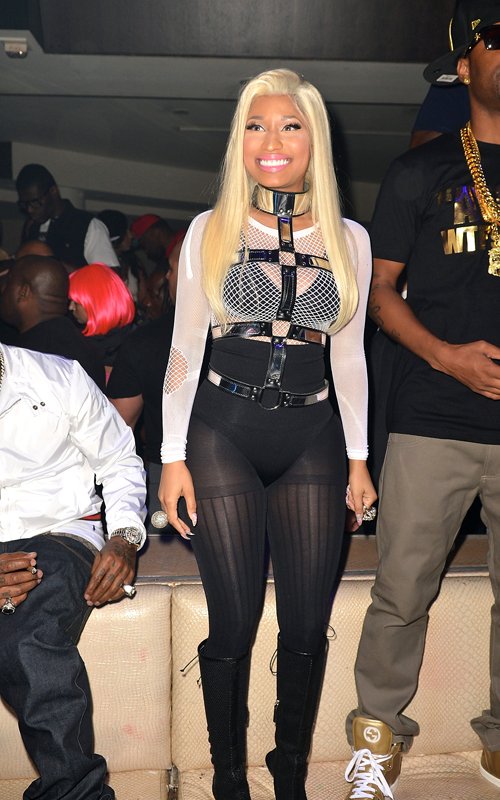 The numbers are in and Nicki Mianj’s sophomore album, entitled Pink Friday: Roman Reloaded lands at #1 on this week’s Billboard 200 chart. The album moved over 251,000 copies in it’s first week and even topped the number one spot on the UK charts. Minaj made history by becoming the first female rapper to take the #1 spot in the UK.

Even though Minaj debuted high on the charts, was she hit with the sophomore jinx?  Her debuted album, Pink Friday debuted at number two on the US Billboard 200 chart with first-week sales of 375,000 copies, which was almost 125,000 copies more.

In a recent interview with New York’s DJ, DJ Clue Minaj was asked whether she believes in the sophomore jinx: “Hell no! This album is gonna sell so much more than Pink Friday. Ask me this question two years from today, Clue. With me, I’m never about first week and all that. I like to look at it for the long haul. I’ma travel, I’ma meet my beautiful babies, my Barbz everywhere, and this is my first time I’m gonna get to do a world tour, so the album is gonna do its thang.”

Comments Off on Was She Hit With The Sophomore Jinx? Nicki Minaj New Album Sold 125,000 Copies Less Than Her Debut Disc 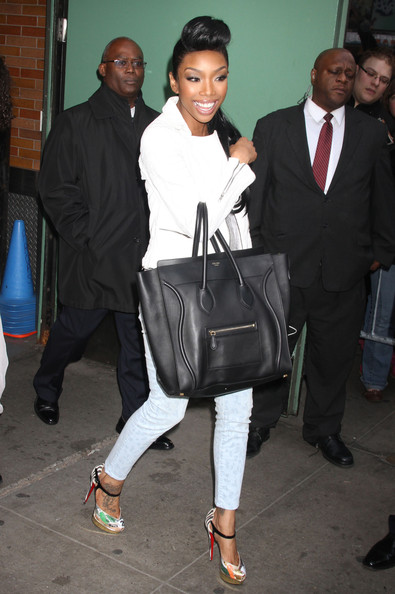 Yesterday, singer and actress Brandy Norwood got all glammed-up as she left ABC’s Good Morning America in New York City. Paparazzi caught her smiling and waving to her fans. She was carrying a black Céline luggage shoulder tote bag ($2,500) and wearing Christian Louboutin Trash Ankle-Wrap d’Orsay platform sandals ($1,345) from the Spring/Summer 2012 collection. Her new CD will be out this summer 2012. 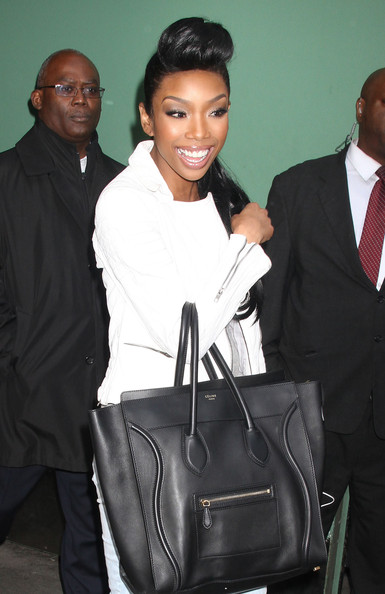 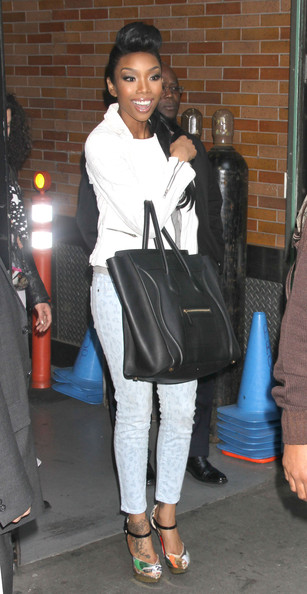