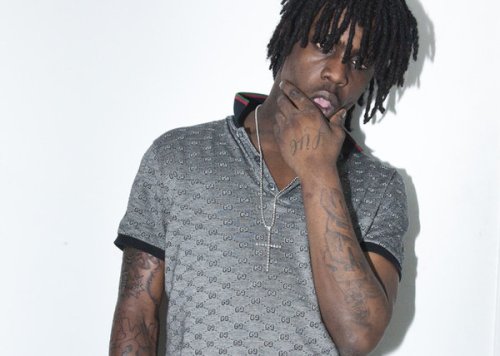 Over this weekend, Kyle Kramer of the RedEye interviewed up & coming Chicago rapper Chief Keef. This 16-year-old emcee has become one of the hottest unsigned artists in the streets. His buzz is crazy! Keef “I Don’t Like” visual has almost two-million views on YouTube. The song became so popular, that Kanye West and his G.O.O.D. Music family are putting out an official remix. During his interview with RedEye, Keef talks about his trip to New York City, meeting with Atlantic Records, offer from Birdman and YMCMB, Chicago’s Hip-Hop scene, his upcoming collaborations, being on house arrest and much more. Below are some excerpts:

What was that trip to New York like? It was cool.

Did you meet Kanye? Nope.

Who did you meet with out there? We met with everyone: Mark Ecko, Complex Magazine, Shade 45 or something [Manager: “Atlantic Records, Bad Boy Records, Fader”], XXL.

Did you meet with Cash Money? No, I talked to Birdman. We’re going to Miami, though.

That’s pretty cool. So you still haven’t signed a deal or anything yet? Nope. Just have labels talking.

A lot of other people I’ve talked to in Chicago have said “Chief Keef, his realness, that’s what makes people like him so much.” And you’re saying kind of the same thing. What do you think it is about you that’s so real that people see? Like I said, I say what’s real. I say what’s going on right now. What we doing. I just say what’s going on with the girls, what they doing, and the n****, and everybody, the people, just people period. What’s going on. What we doing, what my guys doing, what I’m doing and what’s happening right now. So that’s what I do. People like that. And they like my squad. They like how we be rocking to the music.

Are you at all worried about jumping into this industry at age 16? Nah. I’m ready to rock.

You kind of brought the spotlight to Chicago. Do you think there’s something special about Chicago right now? Yeah. This is New Chicago, new era. We got our own little flow. East Side. Like the West Side got their look, Houston, Texas got their look, now we got our look on, that we created, the new generation, the new era. We created the New Chicago thing now that’ll probably have everybody from Chicago rapping like this in the future. Rapping like – we set that trend and everybody rap like that now. Rap how they rap now. Everybody in Chicago starting to rap like, you know what I’m saying. Starting to use [Chicago producer Young] Chop beats too. So you starting to hear a lot of ‘Young Chop on the beat.’ Everybody in Chicago starting to have a Young Chop beat now.

As far as the collaborations you’ve got coming up – Yo Gotti, Young Jeezy, Waka Flocka, my guys, Soulja Boy. I’ll probably do something with Wiz. Rich Kidz. Something with DJ Drama – he ain’t an artist but he’s a DJ.

What do you think it’s gonna be like when the Kanye remix drops? Are you excited? Have you heard what he’s going to do with it yet? No, and that’s crazy that I couldn’t hear my own song yet. I don’t like that.

NEXT PAGE: MORE EXCERPTS FROM CHIEF KEEF INTERVIEW WITH REDEYE

There was this big controversy when you had that show at the Congress Theater, and people were blaming the police coming on you. People are saying your music is really violent, encourages violence. What do you say to people with those kinds of criticisms?

Looking ahead, how much longer are you gonna be on house arrest?

I don’t know man. I’ve been on this too long. But they ain’t trying to take me off so I’m just trying to go to school and get some good grades for them and do all that. That’s my judge’s main focus, is school, and I respect that, that it’s his main focus. It’s cool – and not catching another case. That’s his main focus, really. Like all the little stuff ain’t really that big, but he really likes school so I’m trying to go to school and get some good grades. My last report card I got some good grades. I got some Bs, some Cs. I ain’t get no As yet. Just got to the school, anyway. Yeah, I got Bs and Cs on my report card. That’s good enough.

So you’re still taking classes from here, then?

Yeah, I’m still…even though I didn’t want to, really. But it’s just, I gotta get through this to do what I’m trying to do anyways.

Who else were your influences as far as rappers?

You think it makes sense that the whole industry’s eyes are on Chicago?

I mean, now it is. I think because of me, though. Because I run that bang bang three hunna, you know. I think all the rappers looking at Chicago artists – such as me, [King] Louie, [Lil Reese] Reesy, Fredo [Santana] – the only artists [being paid attention]. Everybody’s looking at us. Because I ain’t seen nobody come up with nobody else from Chicago. It’s other artists, like Spenzo. Spenzo, he cold. They should look at Spenzo. He’s like a Lupe Fiasco. [To photographer] You heard of Spenzo?

Read the entire interview over at RedEye.