Rapper Kanye West who is currently in London for the ‘Watch The Throne’ tour with Jay-Z was spotted going out to dinner with Kim Kardashian. Yeezy was styling on them lames in a Just Don Snakeskin New York Knicks snapback, blue denim outfit and a pair of Nike Air Flight ’89 sneakers. I like how Yeezy rocked the cap and sneakers to bring out the outfit more. His fitted jeans also make the look stand out because they fit right with the sneakers he wore.  Nice out yeezy! Are you feeling his look? 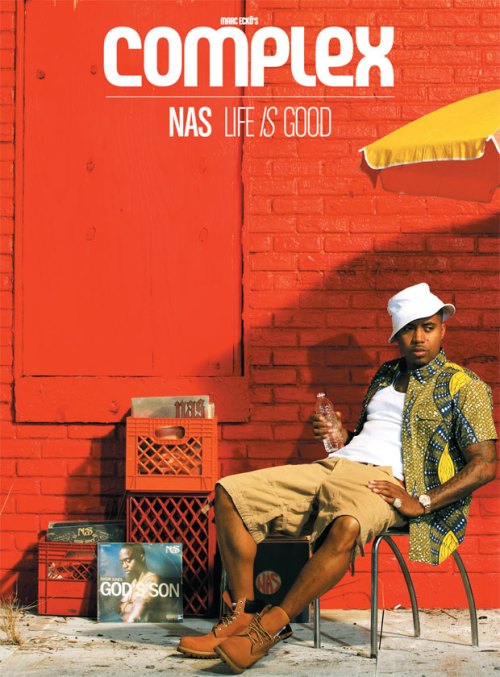 Queen Hip-Hop legend Nas is covering the June/July issue of Complex magazine. This is history once again because Nasty Nas appeared on Complex’s first-ever issue back in 2002. 10 years later, Nasty Nas reconnects with the music/fashion publication for their 10th Anniversary celebration. On the cover, they took it back to the essence as Nas is sitting next to crates with his albums in front of them on a street corner looking very Hip-Hop in a Hawaii shirt, bucket hat, white beater and Timbaland boots. The cover story was shot by photographer Kareem Black ans written by writer Rob Marriott, who sat down with Nas for a long conversation. Below are some excerpts:

“Nasir Jones, 38, is not a hologram. Leaning in the back of a black Escalade, he’s a living, breathing legend. Unlike ’Pac, Nas still walks amongst us—growing older and wiser, taking missteps, surviving. The recently divorced father of a teenage daughter and a 3-year-old son, he had to pay a grip to his ex—the R&B/rock chick Kelis—just before she gave birth. And just as he had to pay another pound of flesh to the IRS.”

Life is Good will be your tenth solo album. Is this a watershed moment for you, or just another album?
This is different. The way you work, your approach, is different each time. I’m at a cool, mature, easy place.

“Daughters” was an emotional record. What made you be so honest?
This is the first time I’m dealing with a teenage daughter, and it blows me away. I don’t know that you’re ever prepared to be a parent. Once you become one, that’s your responsibility. It’s more like me talking to myself, about how I could have been there a lot more. I beat myself up for not being the best I could be. I would ask her: “Am I a cool dad?” or “Am I a good dad? Did I fuck up?” And she would say, “Nah, you’re good.” That’s important to me because I started as a teen. I was around 19 when her mother was pregnant. My daughter means a lot to me. It’s just a record that came from the heart.

Read the entire interview over at Complex.

Back in April Beyoncé was spotted arriving to her sister Solange’s Brooklyn apartment. She was looking very comfortable in a $1,275 Versace Venetian Print Silk shirt paired with black shorts, shoes, hat and sunglasses.

Singer/Model Cassie also wore the same exact shirt as Beyoncé in her “King Of Hearts” visual. This shirt features the house’s signature motif and Venetian-print silk.

In Monica’s “It All Belongs To Me” visual, Brandy sported a $1,275 Versace Barocco Print Silk Twill Shirt.

Former stripper/video model Blac Chyna was spotted hanging out with her rumored rapper boyfriend Tyga. She was wearing a vintage red Versace shirt.

These guys are on fire! Travis Porter recently dropped the official visual to “Pop A Rubberband” just a few days after releasing “Do The Dash”. “Pop A Rubberband” is the second track off their debut album, entitled  From Day 1. Don’t forget that “Aww Yeah”, “Bring It Back” and “Ayy Ladies” are in heavy rotation. Ali, Quez and Strap will be releasing From Day 1 on May 29 via RCA. The 14-track disc feature collaborations with Tyga, 2 Chainz, Mac Miller among others and boasts productions from Justice League, Lil Lody, Diplo, J Mike and M 16. Watch the visual below:

Comments Off on New Visual: Travis Porter “Pop A Rubberband”