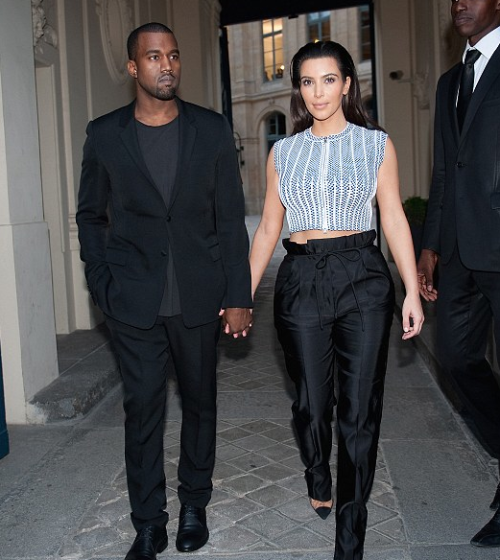 After sitting front row at the Fall/Winter Stephane Rolland Couture show, Kanye West and his girlfriend Kim Kardashian decided to hit up the Louis Vuitton after-party. Last night Tuesday (July 3), Yeezy and Kim K were spotted holding hands in the City of Light as they exited the after-party. They also changed outfits for the event.  Yeezy rocked all-black everything and Kim K wore a zippered crop top and black trousers. Do you like their after-party outfits? 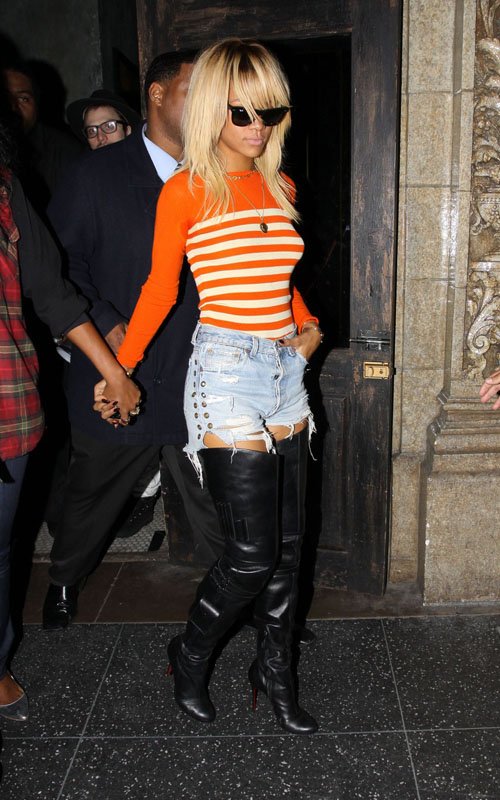 Back in February, Rihanna was spotted leaving her hotel in London. She was rocking denim daisy dukes spiked shorts, a button down shirt tied around her waist, another denim down shirt paired with $3,795 Christian Louboutin Sea.nn Girl thigh high boots. In the second picture, Ri Ri wore the same boots paired with denim shorts and an orange and cream sweater. Which outfit do you like better? 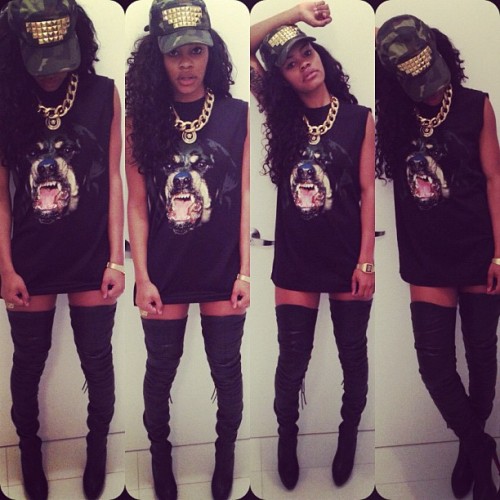 Teyana Taylor was recently spotted wearing a pair of Christian Louboutin zipped back thigh high boots with ribbons hanging from the back paired with a Givenchy Rottweiler tee-shirt. She accessorized her outfit with a camo cap and a gold necklace. 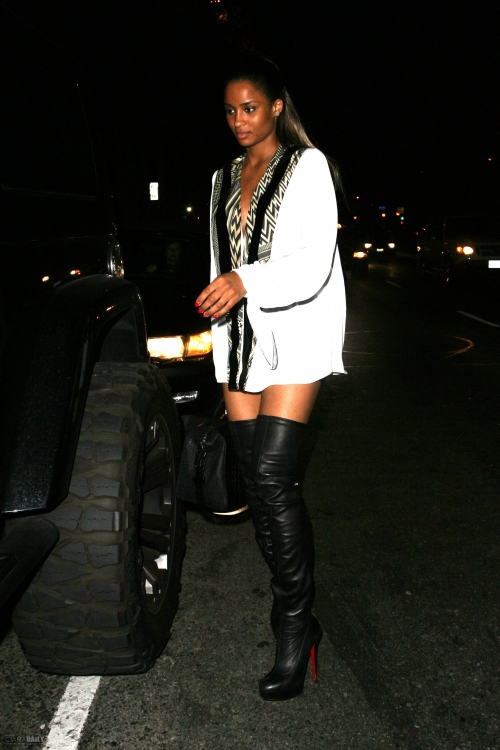 Last year, Ciara was spotted at Dan Tana Restaurant to celebrate one of her friend’s birthday. For the occasion, Ci Ci wore a $659 Givenchy Tribal Print Tunic paired with $2,495 Christian Louboutin Gazolina Thigh-High boots. She accessorized her outfit with a Givenchy Antigona Black Textured leather bag which retails for $1,245. A couple of weeks ago, Ciara held her NYC One Woman Army album listening session. According to reports, the album which is due this fall 2012 received mixed reviews from attendees. Rick Ross, Nicki Minaj and 2 Chainz are featured on the disc. 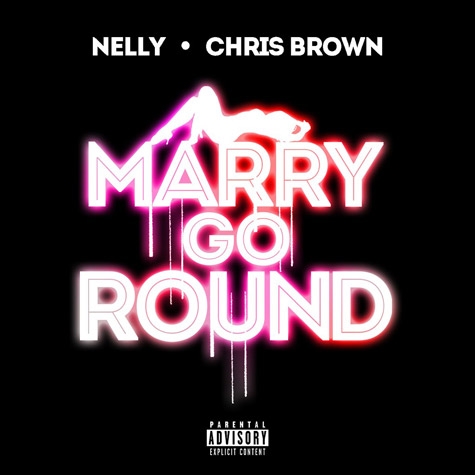 Nelly just released his new joint “Marry Go Round” Ft. Chris Brown. The track serves as the first single off Nelly’s seventh solo album, entitled M.O. which arrives later this year. Da Internz handled the production on this sexual track which caters to the females. Nelly rhymes some freaky lyrics, while Breezy delivers a dope hook. Listen to the audio below:

Is She Giving Beyonce A Run For Her Money? A Slim Looking Raven Symone Cover Heed Magazine’s Summer 2012 Issue

I haven’t heard much from Raven Symone lately nor did I see any recent pictures of her but on the cover of HEED Magazine’s Summer 2012 issue, this former The Cosby Show and That’s So Raven star is looking very slim in a fitted black dress. Is she giving Beyoncé a run for her money? In my opinion, Raven is a sweet and beautiful young woman with a bright nice smile. Inside, the 26-year-old actress and singer offers readers a glimpse at the behind the scenes of her starring role in Sister Act 2 on Broadway as well as her new position as a spokesperson for Merck’s, ‘Plan It Forward’ campaign. This issue hits newsstands on next Tuesday (July 10).

Comments Off on Is She Giving Beyonce A Run For Her Money? A Slim Looking Raven Symone Cover Heed Magazine’s Summer 2012 Issue

After running with Rick Ross since the beginning, being a part of Triple C’s (Carol City Cartel), Rozay’s protégé Gunplay Don Logan just signed a solo deal with prominent Hip-Hop label Def Jam. Believe it or not, I knew this day would soon come and the day has finally arrived. Ross also tweeted that Gunplay’s debut solo album drops soon.

Odd Future’s Singer Comes Out Of The Closet & Confirms He’s Gay: Frank Ocean Says He Was In Love With A Man In A Heartfelt Letter He Wrote

This past Monday (July 2), I reported that Odd Future’s singer and songwriter Frank Ocean opened up about his bisexuality on his new album, entitled Channel Orange. Some people were confused and wondering if it was true or not. Well, indeed it is 100% true. In a recent heartfelt and powerful letter to his fans which Ocean posted on his Tumblr, he confirms that he is gay and was in love with a man when he was 19-year-old. In this letter, Ocean also recounted the time he spent with this man. Read Ocean’s letter in its entirety below: 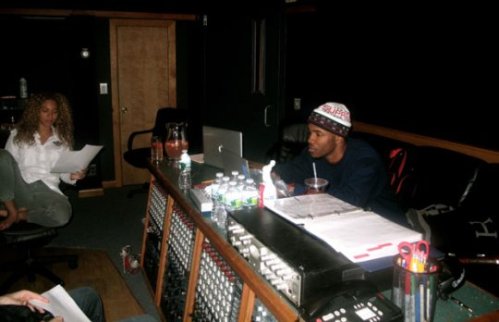 Frank Ocean and Beyoncé in the studio 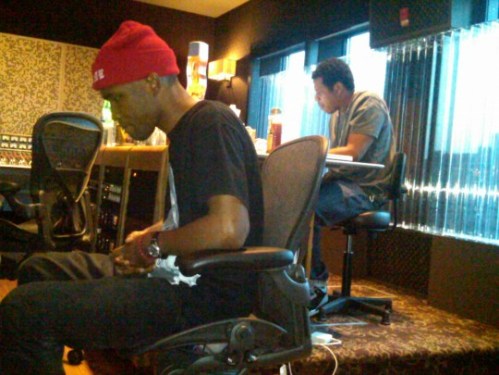 Frank Ocean and Jay-Z in the studio

Whoever you are. Wherever you are… I’m starting to think we’re a lot alike. Human beings spinning on blackness. All wanting to be seen, touched, heard, paid attention to. My loved ones are everything to me here. In the last year or 3 I’ve screamed at my creator, screamed at clouds in the sky, for some explanation. Mercy maybe. For peace of mind to rain like manna somehow. 4 summers ago, I met somebody. I was 19 years old. He was too. We spent that summer, and the summer after, together. Everyday almost. And on the days we were together, time would glide. Most of the day I’d see him, and his smile. I’d hear his conversation and his silence…until it was time to sleep. Sleep I would often share with him. By the time I realized I was in love, it was malignant. It was hopeless. There was no escaping, no negotiating to the women I had been with, the ones I cared for and thought I was in love with. I reminisced about the sentimental songs I enjoyed when I was a teenager. The ones I played when I experienced a girlfriend too quickly. Imagine being thrown from a plane. I wasn’t in a plane though. I was in a Nissan Maxima, the same car I packed up with bags and drove to Los Angeles in. I sat there and told my friend how I felt. I wept as the words left my mouth. I grieved for then. Knowing I could never take them back for myself. He patted my back. He said kind things. He did his best, but he wouldn’t admit the same. He had to go back inside soon. It was late and his girlfriend was waiting for him upstairs. He wouldn’t tell the truth about his feelings for me for another 3 years. I felt like I’d only imagined reciprocity for years. Now imagine being thrown from a cliff. No, I wasn’t on a cliff. I was still in my car telling myself it was gonna be find and to take deep breaths. I took the breaths and carried on. I kept up a peculiar friendship with him because I couldn’t imagine keeping up my life without him. I struggled to master myself and my emotions. I wasn’t always successful.

NEXT PAGE: PART 2 OF OCEAN’S LETTER

END_OF_DOCUMENT_TOKEN_TO_BE_REPLACED

Comments Off on Odd Future’s Singer Comes Out Of The Closet & Confirms He’s Gay: Frank Ocean Says He Was In Love With A Man In A Heartfelt Letter He Wrote

Tagged as 'Channel Orange', Frank Ocean, Odd Future, Odd Future's Singer Came Out Of The Closet & Confirms He's Gay: Frank Ocean Says He Was In Love With A Man In A Heartfelt Letter He Wrote