Returning To Fashion: Eve Reveals Plans For A New Clothing Line & Speaks On Her Style Evolution 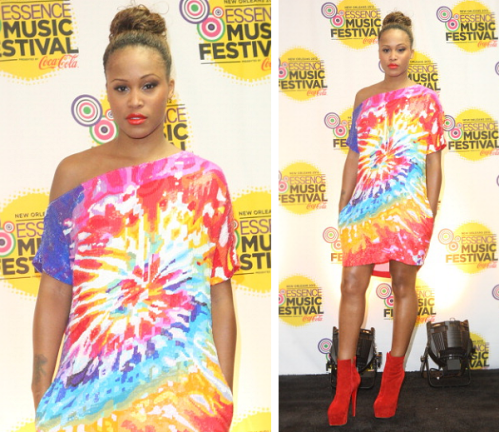 Last weekend, during the Essence Music Festival in New Orleans, Black Voices chatted with Philly’s rapper, actress and fashion designer Eve. The Ruff Ryders first femcee has been busy in the studio working on her long-awaited comeback album and is gearing up to embark on the Ruff Ryder reunion tour. While chatting with Black Voices, Eve talked about the actual outfit she had one, how her style has evolved, and revealed plans for a new clothing line. Below are some excerpts:

Tell us about this amazing sequined tie-dye dress you’re wearing.

The dress is by a company called Ashish, which I’m obsessed with. It’s easy and comfy. But, it’s also glamorous — so it’s the best of both worlds for me. And I’m usually not a color girl, but I love this dress. The shoes are Louboutin. They hurt but they’re worth it.

We’ve loved watching your style evolve over the years. How would you describe your personal style now?

I would call it “easy glamour.” I hate the word “easy” though, because “easy” and “glamour” just don’t sound good together. But, I’m the kind of person that likes something simple with a splash.

Is there anyone you look to for style inspiration?

Not really. It’s more about osmosis. You know what I mean? That’s what fashion kind of is. I’m always watching something or seeing something that inspires me. And it’s really just about how I feel, more than anything else.

We were sad when your clothing and accessories line Fetish shut down again in 2009. Do you plan on bringing it back?

So, what can we expect from the new collection once it launches?

It will be more shoes than it will be clothes.

Read the interview in its entirety over at Black Voices.

Comments Off on Returning To Fashion: Eve Reveals Plans For A New Clothing Line & Speaks On Her Style Evolution

Tagged as eve, Returning To Fashion: Eve Reveals Plans For A New Clothing Line & Speaks On Her Style Evolution