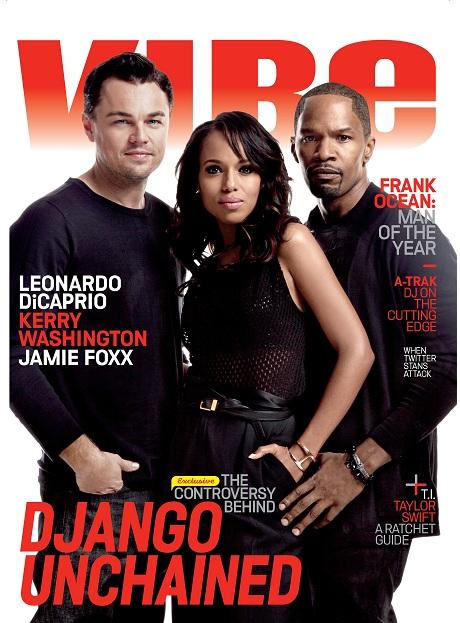 Successful Hollywood actors Leonardo DiCaprio and Jamie Foxx alongside actress Kerry Washington are covering the December 2012/January 2013 issue of Vibe Magazine. Below are some highlights: 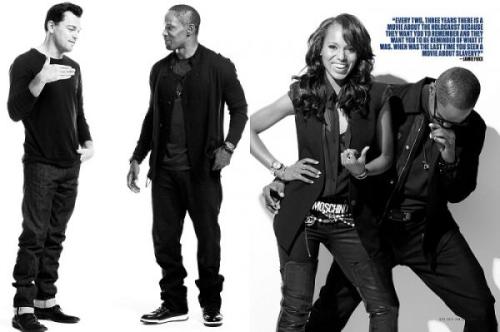 Django Unchained isn’t a blaxploitation slavery flick. Jamie Foxx, who plays a gun-slinging slave on the warpath, reunites with Kerry Washington for the epic tale, while Leonardo DiCaprio finally puts on his black hat and goes dark. Gathered at a Manhattan studio, the big three explain how they mastered the art of telling this historically hot-button story. —Erik Parker

JAMIE FOXX knows what you’re thinking when you see him as a shivering slave in the trailer for his latest film, Django Unchained. This is no Roots. It’s not like he didn’t know his role in Quentin Tarantino’s latest backslap to Hollywood conventions would confuse some and infuriate others. He’s smirking atop a horse in a powder blue costume while going all badass on white folks like some Dolomite slave fantasy for goodness sake. But according to Foxx, 45, and key members of the all-star cast–Leonardo DiCaprio and Kerry Washington–they half-expected the verbal lynching.

With Django Unchained, Tarantino adapts his familiar revenge themes (Kill Bill, Inglourious Basterds) to the story of a slave gone rogue in the name of love. In this flick, the genre-splicing director tracks Django (Jamie Foxx), a slave who is recruited by a German bounty hunter (Christoph Waltz) who happens to be hunting the men who sold Django’s wife (Kerry Washington, 35) to the most wicked of all plantation owners, Calvin Candie (Leonardo DiCaprio).