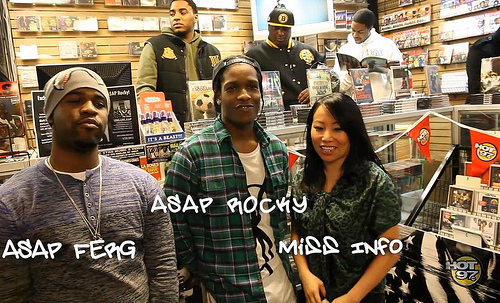 In 2012, Harlem native’s and RCA recording artist A$AP Rocky had an incredible year and made a major contribution to Hip-Hop. This fashionable kid who sports a Soho upscale style kept the blogosphere on fire with his Houston inspired music, dope visuals, and fashionable outfits. He also grew as an artist this year which helped improved his interviewing skills and we also saw less temper tantrums and rants from Rocky in 2012. In 2013, he still has a lot of growing to do as a music artist, business man and fashion stylist. This Spring 2013, Rocky will be opening up for Rihanna on her upcoming worldwide tour.

Last week, celebrity blogger and radio personality, Miss Info made a trip to Harlem’s Black Star Music on Lenox Avenue where Rocky played his new album Long.Live.A$AP for a packed house, with A$AP Ferg by his side. Miss Info also interviewed him, where he talked about coming up in Harlem, the leaked of his debut album, upcoming collaborations with Raf Simmons, Jeremy Scott and Alexander Wang. He also talked about being exposed to so much history after traveling outside of the states. Watch the interview below: