Over this past weekend, Philly’s own Meek Mill made his way to Washington D.C. during the Inauguration for the 2013 ‘Hip-Hop Inaugural Ball II’. Meek performed at the Black Tie affair which was held at the Harman Center to celebrate the re-election of our president, Barack Obama. For the Russell Simmons, Lala Anthony and Terrance J-hosted event, the Maybach Music Group rapper looked dapper in a black suit, shirt and tie paired with Balenciaga Arena Creased Yellow Leather Sneakers. Marsha Ambrosius, Brandy, Eva Longoria, Lance Gross and Raheem DaVaughn were also in attendance at this Philanthropic and Hip Hop Summit Action Network sponsored event. Stay tuned to YDBR for more Inauguration 2013 updates!

These sneakers feature a soft leather upper and creased yellow colorway. They are also completed with a black sole and laces with a mental studded lace-lock. 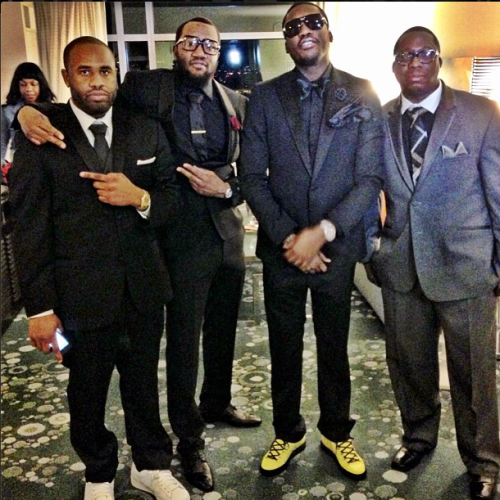 Meek Mill is currently in the studio working on his Dreamchaser 3 mixtape. Back in October, he released his debut album, entitled, Dreams & Nightmares which debuted at #2 on Billboard’s Top 200 and #1 on the Top R&B/Hip Hop Albums chart, with over 167,000 copies sold in the first week. Stay tuned to YDBR for Dreamchaser 3 official release date!