Russell Westbrook Gets Stylish In Designers For Paper Magazine 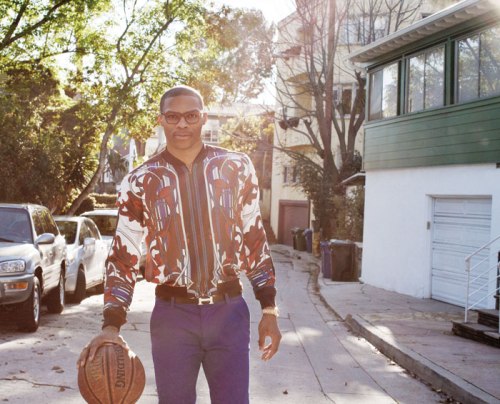 NBA players Russell Westbrook who currently plays for the Oklahoma City Thunder gets stylish in designers for Paper magazine. The three-time All-Star point guard styled in a Gucci jacket and Lacoste pants which he accessorized with a Hermes belt, Oliver People glasses and a Rolex watch. Westbrook has an obsession with high-end fashion and he is often spotted sitting front row at New York Fashion Week. Over the past few months, I realized that Westbrook is very flamboyant with all his bright colors, prints and patterns. Below are some excerpts:

“Russell Westbrook is an aggressive player on the court. The starting point guard for the Oklahoma City Thunder is known for hitting acrobatic layups and unblockable pull-up jump shots. But Westbrook made his riskiest play last year at a postgame press conference, where he wore a pair of fire-truck red full frames and a Lacoste shirt covered in antique fishing lures. Never mind that the young Thunder team had just demolished the Lakers — where’d he get that shirt?“

“Westbrook’s love of patterns goes back to childhood–he remembers posing for a middle school portrait in a Platinum FUBU shirt with an all-over Fat Albert print. Though he visits the malls in Oklahoma City, he mostly trolls websites for ideas. ‘Online shopping is the best thing that’s ever happened to me.‘”