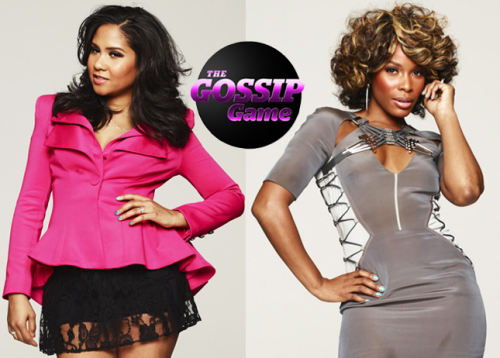 The on-screen tension between Hot 97′s own K. FOXX and Power 105.1′s ANGELA YEE on VH1′s newest reality series, The Gossip Game is undeniable. The two radio personalities have been battling since the series premiered, and there doesn’t appear to be an end to their brewing differences in sight. Recently, I interviewed K. FOXX for Juicy magazine to get her stance on a number of things including rise from humble beginnings, how she managed to work her way through the male dominated radio industry and issues with her on-screen nemesis, ANGELA YEE.

Juicy: After doing radio in Miami for years, what brought you back to NYC?

KF: It’s not like I had to go seeking for it. It kind of came to me. Ebro called me up and said, ‘we have an opportunity for you to be on air for a week and then we will make a decision.’  I was like, ‘okay.’  It came to me at a time when I was really seeking something more in my career, and then I got the phone call.

Juicy:  Angela Yee has said numerous times that the difference between you and her, what may be the reason for tension, is that she is an equal with the male co-hosts on her morning show, and claims you are not. How did you feel about those comments?

KF: I think she’s just trying to throw jabs at me. Me, Ciph and Rosenberg all add something to the show. I am the female on the show, I come out with different ideas. [Ciph and Rosenberg]  come up with comedy skits and other things.  [Angela’s] show [Power 105’s ‘Breakfast Club’] is drier – it’s watered down. We’re more creative. We come up with skits, and we’re intellectual as well. As far as what she says,  I think that’s all her insecurities showing.

Juicy: So then what is the biggest difference between you and Angela Yee?

KF: I am colorful, she’s black and white. I live my life in color. I dream in color, that’s actually the name of my organization for kids. There are so many colors in my life that make me who I am. You can tell by the way that I talk, dress, and how I carry myself. When you look at her, it’s like a statue, a very dry statue.

Juicy: Do you think Angela’s jealous of you and all your ‘color’?

Juicy: Are these the type of situations that make it harder being a female in the radio industry?

KF: I think that it is hard being in the radio industry period! But when you are a female, you have to work extra hard not only because it’s a boys club, but people are always going to test you. It’s more challenging, but I think I do a pretty good job at maneuvering past those things.

Juicy: What else can viewers expect from you this season on ”The Gossip Game”?

Be sure to catch K. FOXX on VH1′s The Gossip Game Monday’s at 9pm.

This interview is also posted on Juicy’s site here!