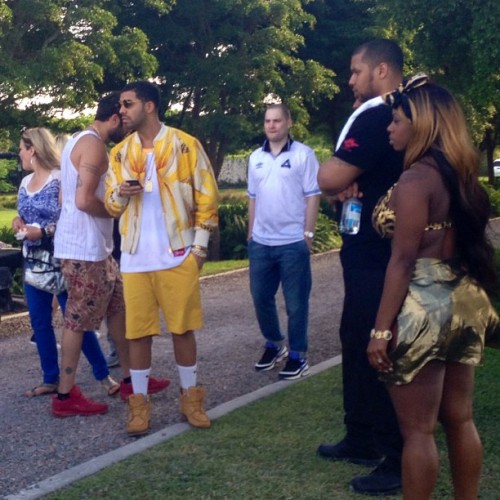 YMCMB’s rapper Drake was  photo’d on the set of DJ Khaled’s “No New Friends” visual shoot. The track will appear on DJ Khaled’s upcoming LP, Suffering From Success. In the Colin Tilley-directed visual, Drake wore $2,935 Alexander McQueen Dragonfly-Print Wool and Silk-Blend Bomber Jacket layered over a white tee-shirt which he paired with yellow shorts and Timberland boots. This jacket is from the brand’s Spring/Summer 2013 collection and features an exploded design taken from the animal’s wings. The piece has been crafted using a blend of wool and silk to provide long-lasting luxury. You can purchase this jacket at Mr Porter. 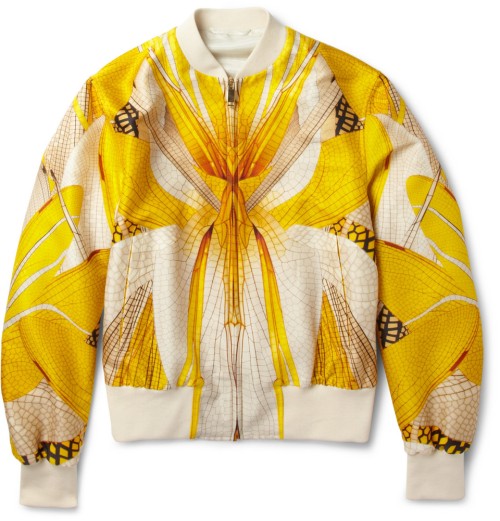 Back in March, I posted some photo’s of Meek Mill performing at BET’s ‘Rip The Runway‘. During his segment, the MMG rapper also wore this $2,935 Alexander McQueen Dragonfly-Print Wool and Silk-Blend Bomber Jacket layered over a black tee-shirt with denim jeans. He completed his outfit with a pair of classic $180 Timberland boots. Are you feeling Meek’s runway outfit? You can purchase this jacket at Mr Porter. 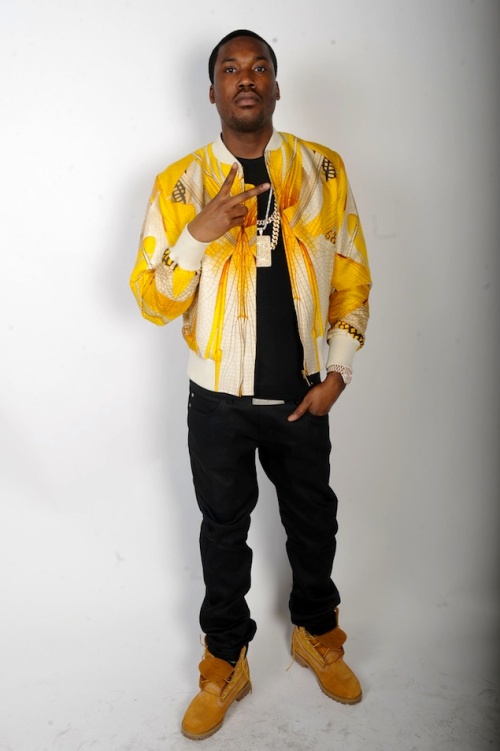 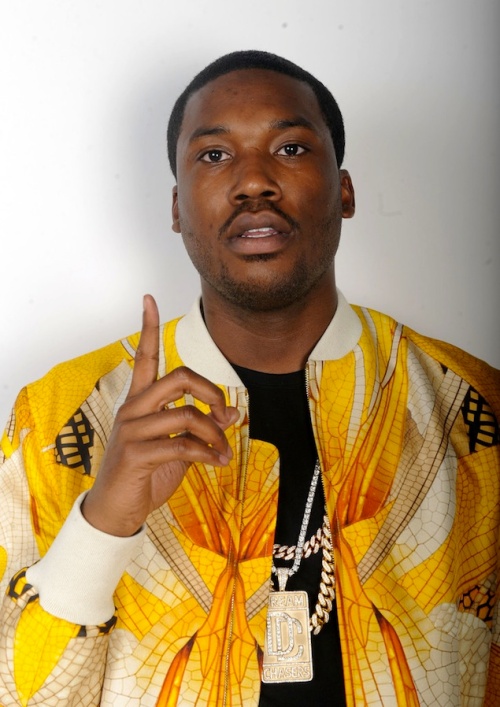 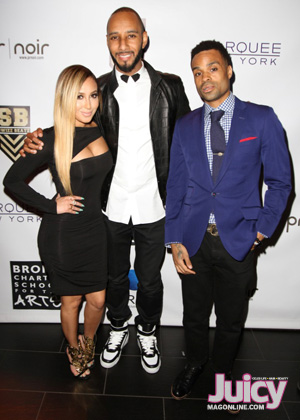 Earlier in the week, Singer/actress-turned-socialite Adrienne Bailon attended the Bronx Charter School for Arts and entertainment mogul Swizz Beatz’s annual art auction at Marquee in NYC.  The event raised over $200,000 by selling several pieces of original artwork from students as well as autographed Michael Jackson CD and an autographed music sheet from singer Adele. For the event, Bailon wore a fitted black dress which she paired with $1,695 Giuseppe Zanotti Baroque Leaf Sandals. These oversized gold-tone wings sandals features a whisper-thin cantilever heel, buckled ankle straps and leather sole. You can buy these sandals at Shop Bop. 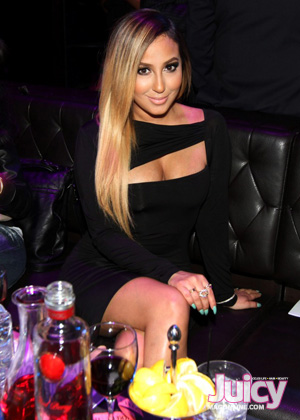 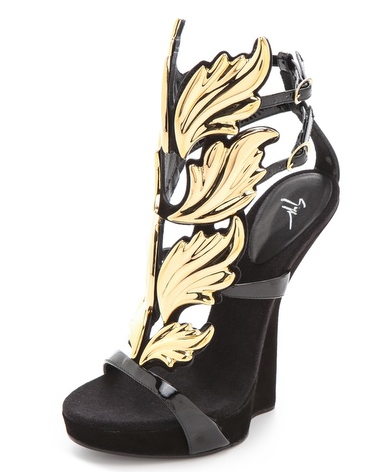 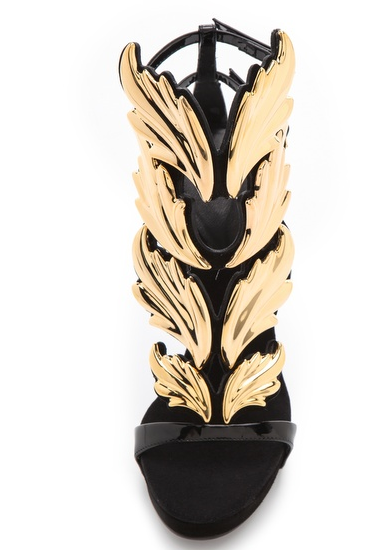 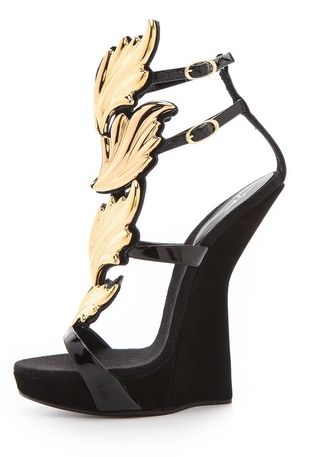 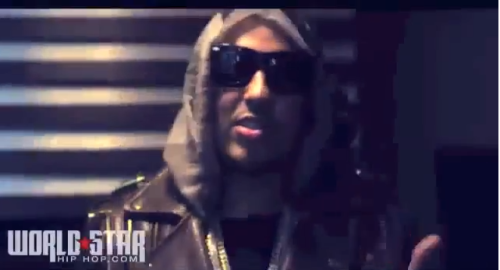 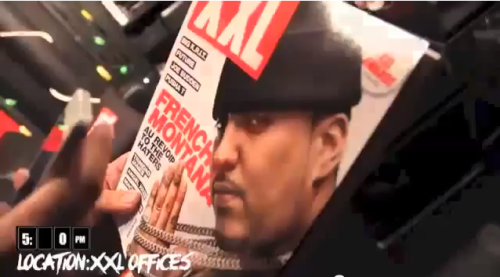 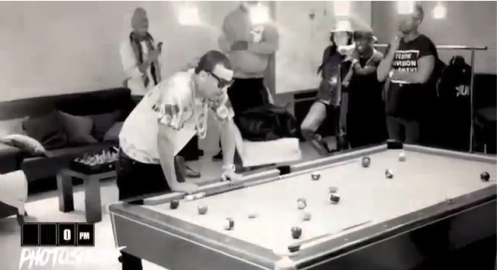 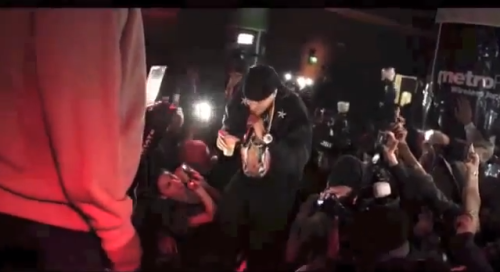 Before Morocco born-Bronx bred rapper French Montana releases his solo debut, Excuse My French next Tuesday (May 21) via Bad Boy/Interscope Records, he goes back to 2012’s mixtape, Mac & Cheese for his “State Of Mind” visual. In the clip, Montana rides around NYC and make stops at the Bad Boy office, Power 105, Hot 97, XXL magazine, and Sirius radio. He ends the visuals with a performance at SOB’s.

Excuse My French will feature the singles “Pop That,” “Marble Floors,” “Freak,” and “Ain’t Worry Bout Nothin”. On the album, Montana get assists from Diddy, Rick Ross, Nicki Minaj, Drake, Birdman, Ace Hood, Snoop Dogg, Lil Wayne, Ne-Yo and plenty of others. RSVP the album on iTunes. Watch below:

Comments Off on New Visual: French Montana “State Of Mind;” ‘Excuse My French’ Arrives This Tues May 21st

Cassie Gets Pretty In $1,913 Alaïa Suede And Stingray Sandals 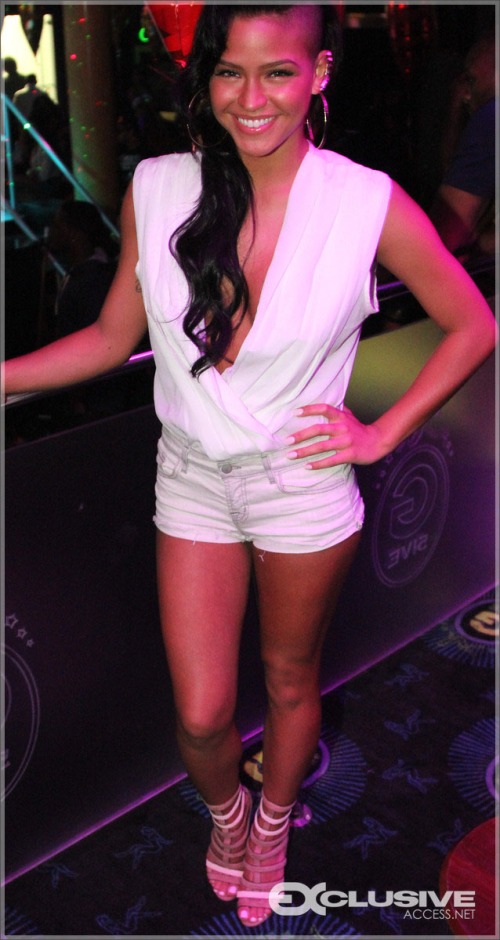 Singer/model Cassie recently hosted a Ciroc Coconut party at Miami’s G 5ive Gentlemen’s Club. For the occasion, Diddy’s girlfriend wore a white top and denim shorts accessorized with $1,913 Alaïa Suede And Stingray Sandals. These 4.5 inch heels are flawlessly crafted from suede and stingray and feature a zip fastening along back. You can get these sandals at Net-A-Porter! 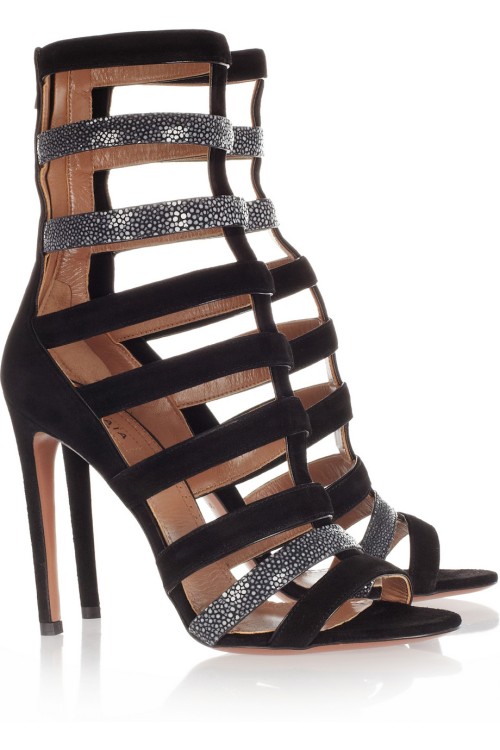 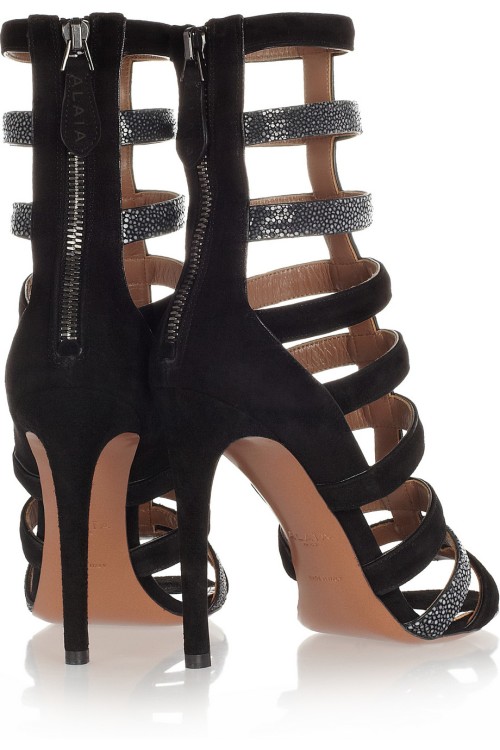 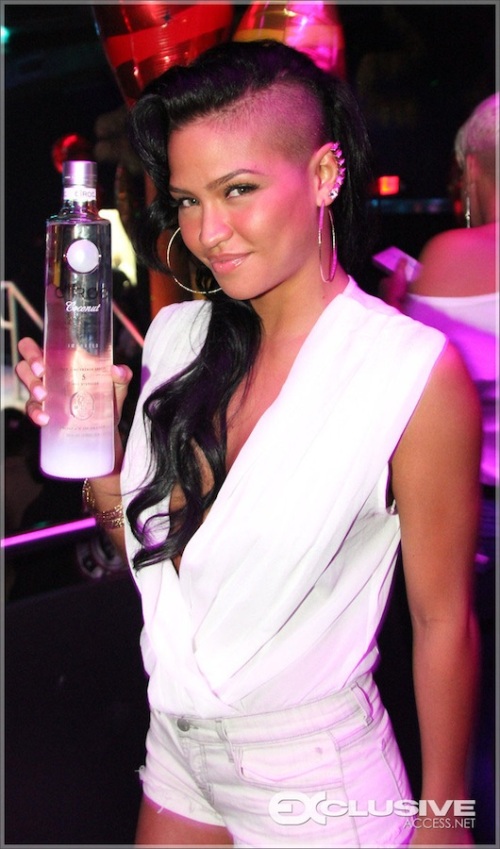 Comments Off on Cassie Gets Pretty In $1,913 Alaïa Suede And Stingray Sandals 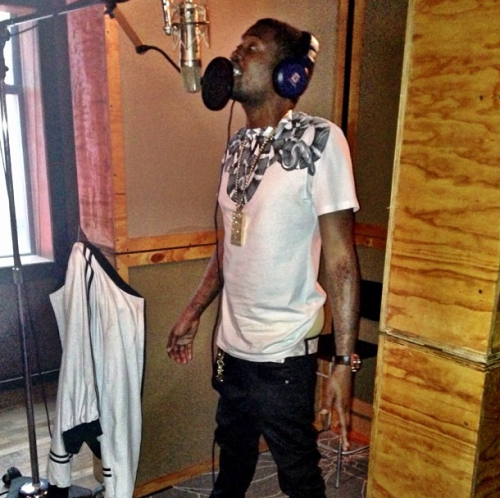 Philly’s own Meek Mill was spotted in the studio and sitting on his new white Porsche in a $196 Marcelo Burlon County Of Milan Tee-Shirt. This white cotton ‘Sol’ tee feature a round neckline, contrast black and grey snake print at the chest and back. Buy this shirt at Far Fetch. The MMG rapper is in the studio working on his new mixtape, Dreamchasers 3. This project arrives this summer! 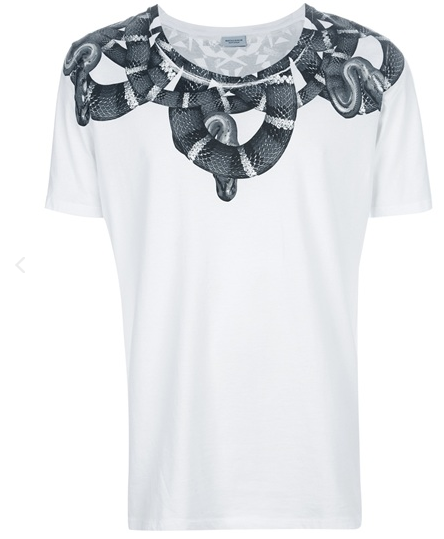 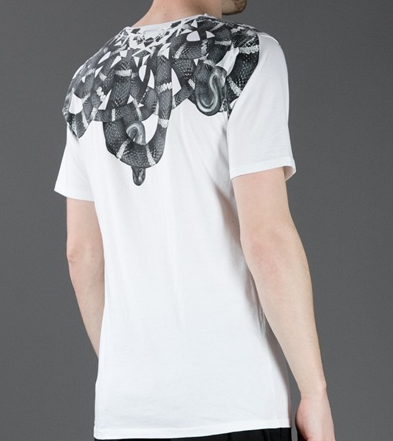 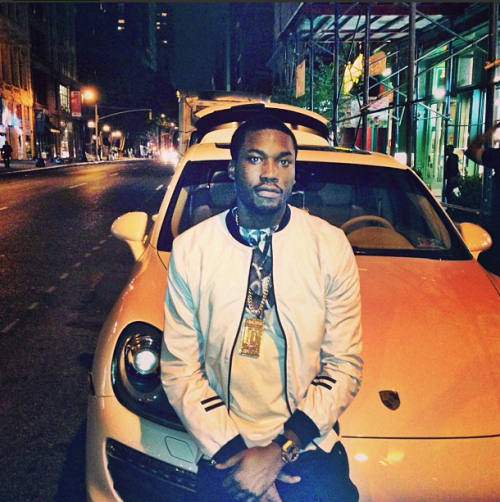 Comments Off on Some Cool Fashion: Meek Mill Sports A $196 Marcelo Burlon County Of Milan Tee-Shirt

Rihanna is still in NYC! Photogs caught her heading to the set of her Budweiser commercial. She showed her sexiness in a black cropped jacket and grey skirt accessorized with $1,513 Alaia Embellished Suede Sandals. Ashanti also wore these sandals here. What is your verdict on Riri’s look? The multi-platinum singer is also working on her new fragrance called ROGUE by Rihanna. Buy these sandals at Net-A-Porter! 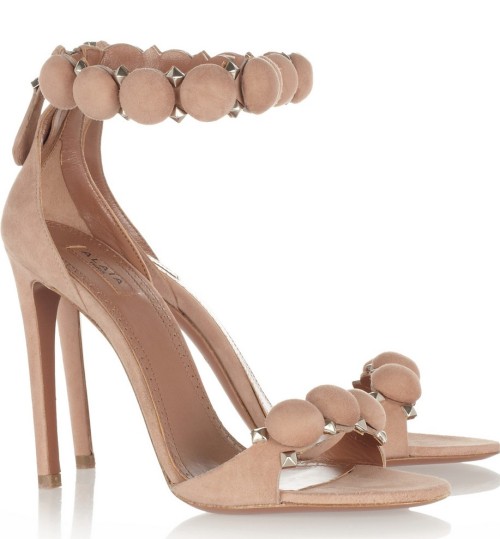 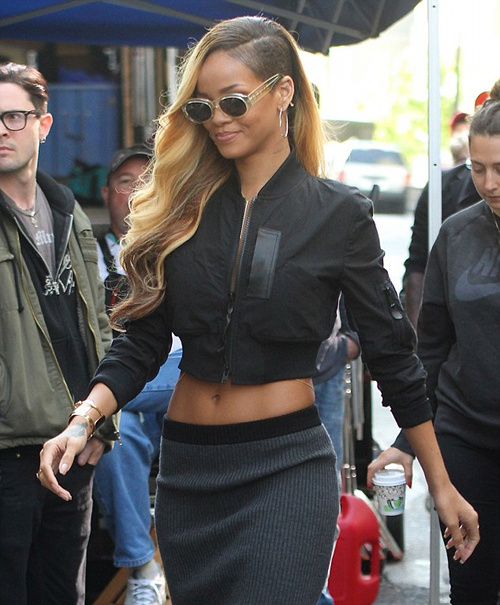 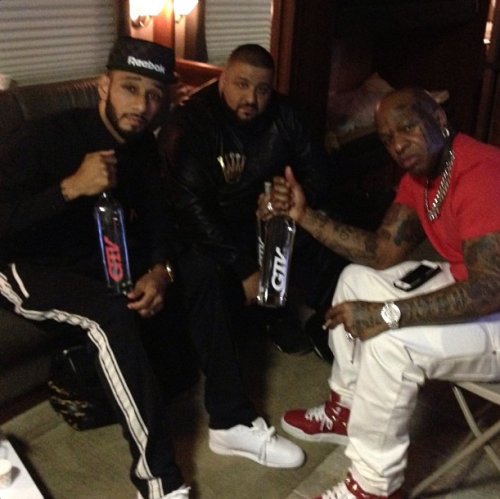 Music mogul Birdman was photo’d with Swizz Beatz and DJ Khaled. His sneakers of choice were $627 Givenchy Star Studded Leather High Top sneakers which he paired with a red shirt and white denim jeans. These red and white textured leather hi-top Givenchy sneakers feature a round toe with perforated detailing, lace-up fastening , a Velcro fastening ankle strap with gold-tone star studs, ribbed detailing to the heel and a thick sole. Purchase these Givenchy sneakers at FarFetch! 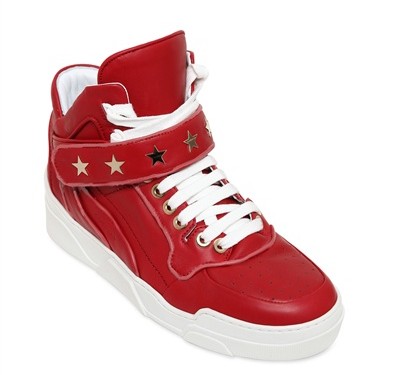 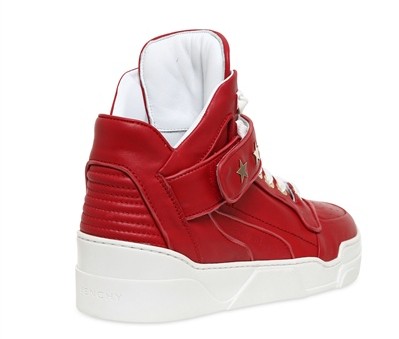 Ciara Get Assists From Future & B.o.B. On “Body Party (Remix)” 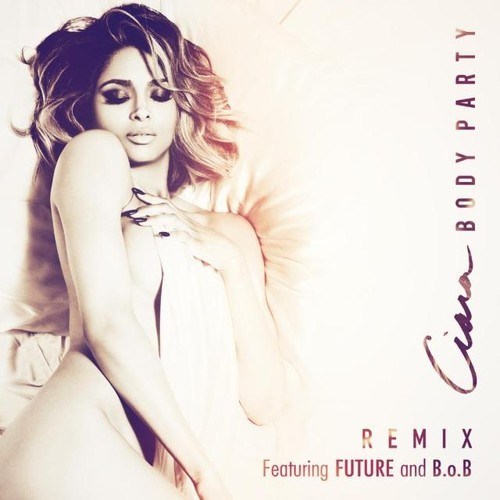 Ciara get assists from her rapper boyfriend Future and B.o.B on “Body Party (Remix)“. The song will appear on Ciara’s self-titled album which arrives July 9th. In the meantime, RSVP her next album on iTunes. Mike Will Made It handled the productions! The album also features the unreleased singles “I’m Out” Ft. Nicki Minaj and “Where You Go” Ft. Future. Sounds like Cici have another hit in the making!

Comments Off on Ciara Get Assists From Future & B.o.B. On “Body Party (Remix)”

Tagged as Ciara Get Assists From Future & B.o.B. On "Body Party (Remix)"