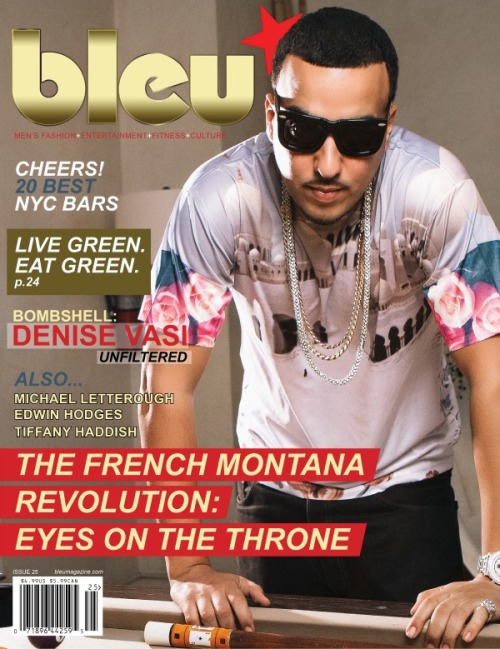 Bad Boy’s recording artist French Montana covers the latest issue of Bleu magazine with a special double cover to celebrate their 25th issue. The publication hosted a private dinner party at Parlor in NYC. Montana’s girlfriend Trina was present. Former Basketball Wives Miami reality star Meeka Claxton and Sassy from Black Ink Crew were also in attendance. Below are some excerpts via The YBF:

“I would say my dream collab would probably be something with Tupac . He was my favorite artist and I grew up listening to him. I have a lot of respect for the work he did, and it would be an honor to be on a track with him.”

Where he finds inspiration for his signature rap:

“I get inspiration from everybody: artists like Adele, Cold Play. I would love to work with them and give the fans a little something different. I always wanna outdo myself and change it up. I think collaborations with artists like that would be a great look.”

Describing the types of music he enjoys:

“I listen to everything; all types of music all the time. Not heavy metal though.”

On surviving the industry:

You need to know how to help yourself by yourself because sometimes there won’t be people there to lean on. You have to hold yourself up when nobody else can.”