Angela Simmons’ 106 & Park Takeover; Is BET About To Announce That She’s The New Co-Host?

Socialite and entrepreneuress Angela Simmons is still handling co-hosting duties on B.E.T.’s ‘106 & Park‘. Most likely, the executives are still testing her to see if they are going to make her a permanent host. It is rumored that the network is in the process of announcing that Angela is the new co-host. The fashion trendsetter will also be co-hosting BET’s ‘106 & Park‘ for the BET Experience at L.A. Live during the BET Awards weekend. The show will broadcast live from the Nokia Plaza. 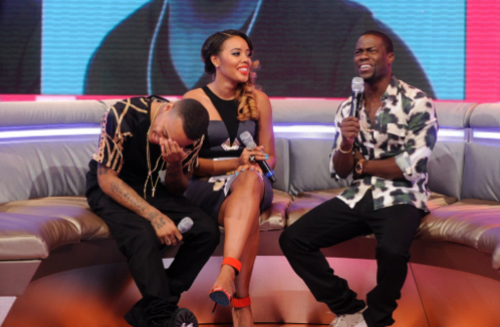 Comments Off on Angela Simmons’ 106 & Park Takeover; Is BET About To Announce That She’s The New Co-Host?

Tagged as 106 & Park, angela simmons, Angela Simmons '106 & Park' Takeover; Is BET About To Announce That She's The New Co-Host?

MMG’s Wale is still in NYC making his promo rounds, promoting his new album, The Gifted. This past Monday, he performed at NYC’s Best Buy Theater. Read my recap here! Wale recently stopped by Power 105 and chopped it up with DJ Suss One. Wale was photo’d in a $1,170 Givenchy Fighter Jet Hoodie. This hoodie is from the fashion house’s Resort 2013 collection and features the brand’s signature vintage airplane motif throughout, ribbed cuffs and hem, and seam pockets on the sides. You can buy this hoodie at Barneys. Wale paired his hoodie with waxed denim jeans and Air Jordan 1 ‘Bred’ sneakers. The Gifted in store and on iTunes now.

According to early reports, The Gifted will debut at number one on Billboard with approximately 140-160k units sold in the first week. 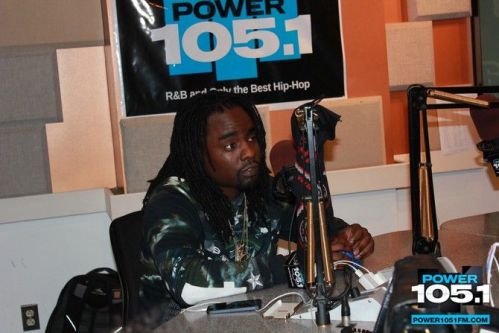 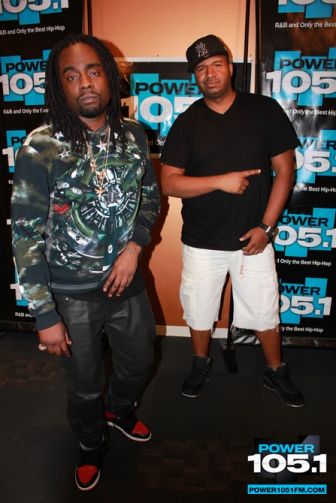 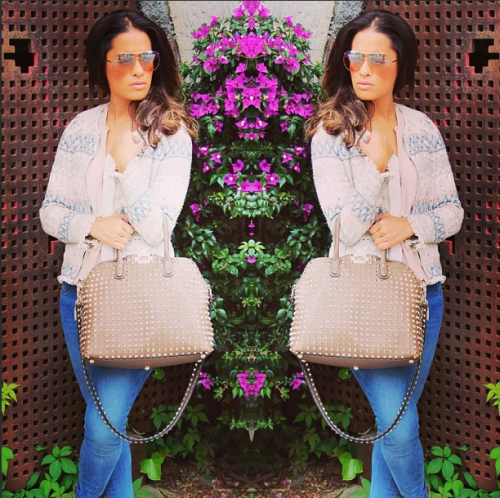 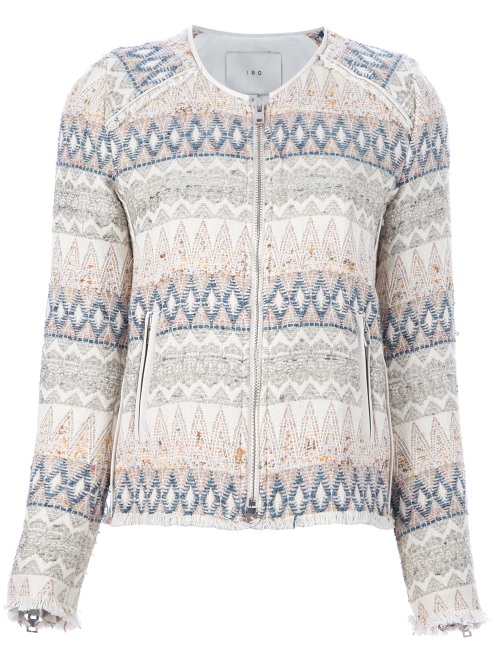 Let me say this before I even get into the story, I’am obsessed with Don C’s style. He’s the definition of fashion! I think I was in my sophomore year at Rutgers University when I became obsessed with his style. Back then, I never knew his name, I just knew he was the curly hair dude who was always with Kanye West. After doing some research, I found out that he was actually Kanye West’s manager.

Anyway, the music manager, fashion designer, boutique owner and the inspiration behind a lot of Kanye’s looks recently did a street shot for Hypebeast. He looked dope in a $700 Givenchy Madonna-Print Cotton-Jersey Tee-Shirt paired with black leather pants. Don C topped off his outfit with a Just Don hat and Air Jordan Retro 4. This tee features striking images of the Madonna made its SS13 collection and you can get it at Mr. Porter. 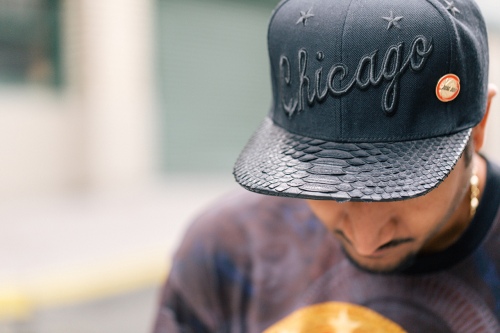 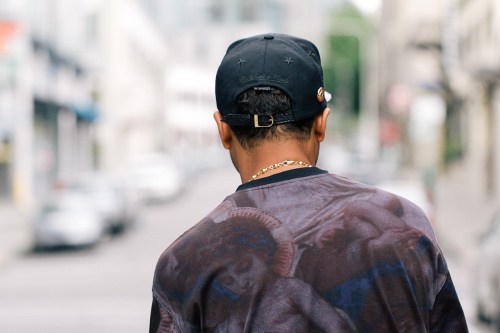 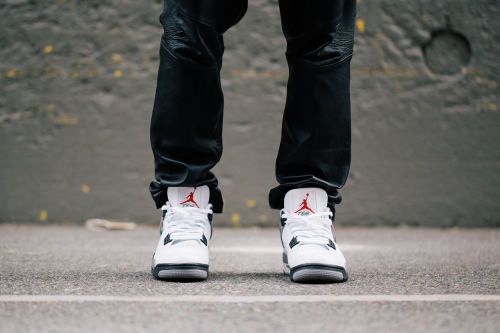 Comments Off on Get The Look: Don C In A $700 Givenchy Madonna-Print Cotton-Jersey Tee-Shirt & Air Jordan Retro 4

Here’s another exclusive preview of the upcoming talk show, The Real. The round-table style show has already been labeled as a younger version of The View and is led by five bold, diverse and outspoken women–singer/reality star Tamar Braxton, actress Tamera Mowry-Housley, comedian Loni Love, TV personality/actress Adrienne Bailon, and fashion expert Jeannie Mai. Is daytime television getting more diverse? From the looks of it, it is!

The 4-week test run, produced by Telepictures Productions and distributed by Warner Bros. Domestic Television Distribution begins July 15. The show will air on select FOX-owned stations in NY, LA, D.C., Philly, Phoenix, Houston and Tampa. On the show, these women reflect the home audience and unapologetically say what women are actually thinking.  Their unique perspectives are brought to life through their candid conversations about topics ranging from their own personal lives to the news of the day to beauty, fashion and relationships. The clip below shows various opinions including Tamar on sex, Tamera on pop culture, Loni on healthy food, Adrienne on guilty pleasures and Jeannie on body image — you think it, they say it.

Comments Off on Tamar Braxton, Tamera Mowry-Housley, Loni Love, Adrienne Bailon & Jeannie Mai Gives Us Another Preview Of ‘The Real’

Philadelphia 76er’s ballers Dorell Wright and Nick Young was photo’d at the White House Down movie premiere. For the occasion, Wright rocked a blue top and denim jeans paired with $545 Balenciaga Patchwork Sneakers which are available at MatchesFashion. As for Young, he opted for a Hood By Air (HBA) hoodie layered over a long white tee-shirt paired with skinny black jeans and Air Jordan sneakers. What outfit do you like better? 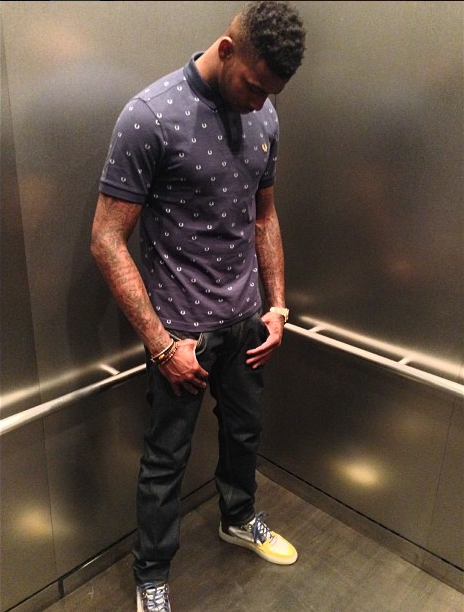 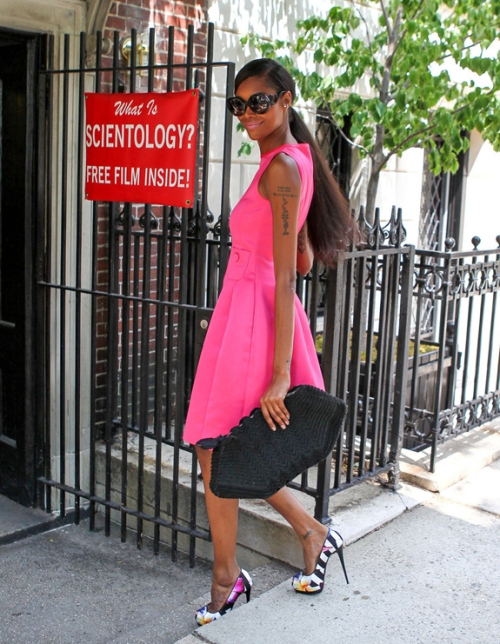 Model Jessica White recently took some time away from filming her upcoming reality show to visit the Church of Scientology in NYC. According to New York Post’s Page Six, “White is the latest celebrity to join Scientology. Sources tell us she’s talked for some time about joining the church, which boasts Tom Cruise, Will Smith and John Travolta as members.” During her visit, the Sports Illustrated Swimsuit model looked cute in a pink dress accessorized with a black clutch, Giuseppe Zanotti Multi Color Satin Floral Platform Pumps and dark Prada sunglasses. 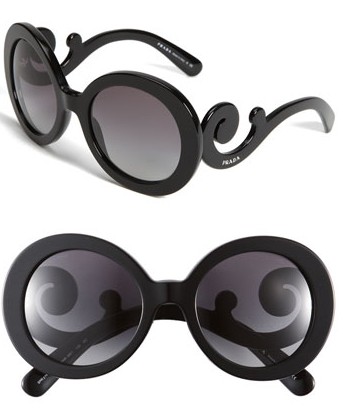 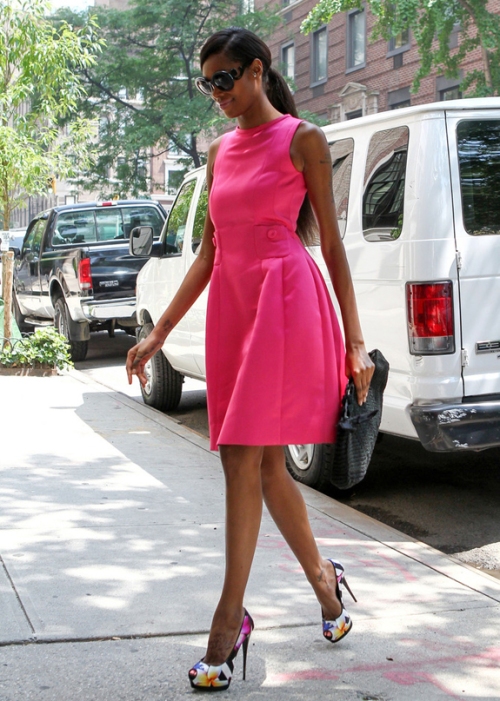 On Monday (June 24), Maybach Music Group’s Wale performed at NYC’s Best Buy Theater for a sold out crowd. With three albums to date, the D.C. native-has proven that he’s “The Gifted“.

Earlier that day, I received passes from Atlantic Records (Wale’s label) to cover this event. I arrived to the venue around 9:30 pm. Ty Ty Smith & Emory Jones from Roc Nation (Wale’s management company), and executives from Atlantic Records were also in attendance. It was important for these guys to be present because NYC is a major market for Wale and it was the eve of his highly anticipated album, The Gifted.

DJ 5’9 was on the 1’s and 2’s warming up the crowd. Shortly after 10 pm, Wale stormed on stage in a Givenchy Star-Detail Cotton Shirt paired with black waxed denim jeans and Air Jordan sneakers. Wale opened up his set by performing “Love Hate Thing,” his latest single from The Gifted, followed by an acapella version of “Legendary” from his last alum, Ambition.

By then, the crowd was fully hyped, sweaty and rapping every word along with Wale. He allowed a fan in the crowd to rap his entire verse to “Chain Music“. Wale brought out a few surprises during his show and the first was French Montana’s Coke Boy affiliated Chinx Drugz. They performed “Let A ***** Know.”

Wale also performed “Rack City“, “Bait,” “Slight Work” and “Back Ballin,” in which he brought out Jay-Z’s Roc Nation Sports Agency new client Kevin Durant of the Oklahoma City Thunder. NYC showed the baller a lot of love. Wale’s screaming and over-excited fans had no idea that he would bring out Jadakiss for “600 Benz,” followed by The Lox’s other band members Style P and Sheek for “All About The Benjamins“.

Wale continued his set by performing new tracks off The Gifted including “Rotation,” “Simple Man” and “Bricks,” bringing out Yo Gotti. T.I.’s newest signee also performed his street anthem “Stacks“.  After that, Wale slowed it down for the ladies and performed “Lotus Flower Bomb,” “Diced Pineapples” and “Bad“.

The biggest surprise of the night came when Wale brought out DJ Khaled to introduce his newest single “Clappas“. Before thanking his fans, Wale ended the show with his verse to “No Hands“.

The Gifted in store and on iTunes now.