Angela Simmons is back with another Instagram photo shoot and she’s in the holiday spirit. Christmas can’t come any quicker! Ang posed in front of a Christmas tree and sitting on a sofa in the red room at Bethanny TV. She wore a $149 Inception Dress by Shop Reverie layered under a fur faux jacket from her Foofi fur line styled with nude Christian Louboutin pumps.

Ang’s sold out dress features a large leopard multi print along the front with a solid back. What are your thoughts on this look? 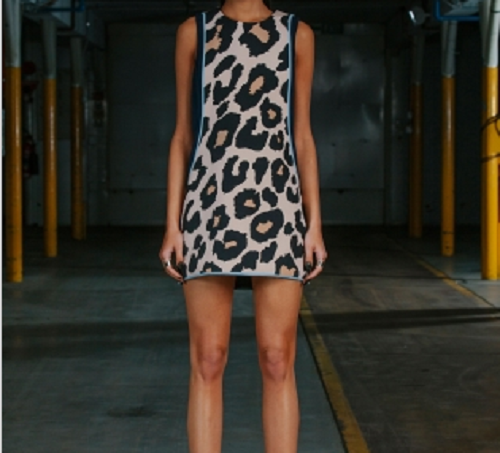 Kanye West Closes His Main Fashion Office In Milan; Reportedly Opening Up A New One In NYC

Does this guy ever stop working? Even in the middle of a busy tour schedule and new sneaker deal with adidas, Kanye West is still making dope moves with the majors behind the scenes. Last week, Kanye closed the doors to his Milan-based main fashion office, which was located at number 14 of course Venice. He is moving his fashion house to NYC.

“A decision made ​​overnight,” an anonymous source confirmed to MFF. The source then told the Italian-based website, “Without warning, like a bolt from the blue, we were asked not to return to the office the next day. The reason was simple, the West has decided to start from scratch to New York City with an unidentified project in fashion.“

Over the past few years, Kanye has been struggling with the launch of his fashion line. In October 2011, he debuted his “DW” by Kanye West womenswear collection at Paris Fashion Week. On March 6, 2012, Kanye returned to Paris and showed his Autumn/Winter 2012 collection during fashion week. During the presentation, models walked the runway in a total of 20 different looks which included leather, furs and biker jackets. Fashion critics said that the second time around, “Kanye’s line was better than his first tried“. WSJ’s Christina Binkley said, “This collection looks like he has had a lot of consultants working with him, But it’s way better than before”.

“We worked day and night in a luxury line with the best suppliers of Made in Italy,” said another anonymous source.

So, as of now, Kanye’s main fashion office is reportedly being moved to NYC, with a new brand positioning and none of the workers from Milan are involved in Kanye’s new project.

Tagged as Kanye West Closes His Main Fashion Office In Milan; Reportedly Opening Up A New One In NYC

They are still an item and going strong! Model Chanel Iman and her rapper boyfriend A$AP Rocky were spotted out on an intimate date in NYC. The twosome attended the Mandela: Long Walk To Freedom screening, followed by a romantic dinner at Nobu.

For the occasion, Chanel looked gorgeous in a feathered white floor length gown. As for Rocky, he wore a white hoodie and black blazer under a jacket with black jeans and boots.

Chanel and Rocky also sat court side recently at Madison Square Garden and watched the Knicks vs Pacers game.

NEXT PAGE: MORE PAGE OF CHANEL IMAN AND A$AP ROCKY IN NYC

END_OF_DOCUMENT_TOKEN_TO_BE_REPLACED

Tagged as Chanel Iman And Her Boyfreind A$AP Rocky Attend The 'Mandela: Long Walk To Freedom' Screening In Style

From NYC to Atlanta, Fabolous continues to celebrate his 36th birthday celebration. Last week, he had a Great Gatsby inspired party in Manhattan as well as a Moët Nectar Impérial Rosé hosted party. Over this past weekend, Fab kept the party floating at Compound nightclub in Atlanta.

For the night of partying, Fab rocked a navy blue hoodie styled over a black & white striped shirt with black jeans. He added dark sunglasses, an $875 Just Don Mixed Exotics Brooklyn Cap and $695 Chanel Men’s Trainers to top off his look.

These luxury Chanel sneakers is from the fashion house’s Spring/Summer 2011 Collection.

NEXT PAGE: MORE PICS OF FAB PARTYING IN ATL END_OF_DOCUMENT_TOKEN_TO_BE_REPLACED 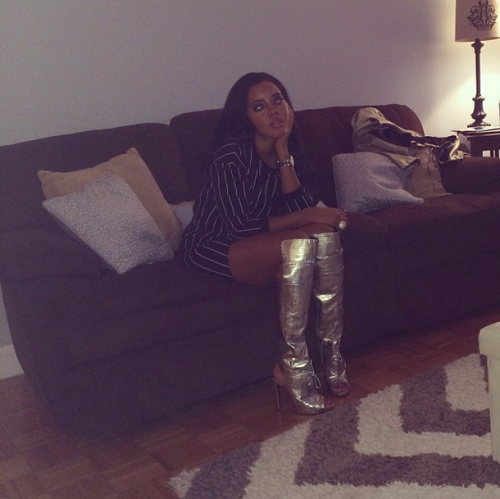 Before hitting the streets of Manhattan for a night out on the town, Angela Simmons shared a couple of photos on Instagram. She styled a black shirt dress with $455 London Trash Snake Knee High Boots in gold (shown in blue pascha below).

Angela is so blessed to have so many educated, supportive, amazing, talented people in her life. She’s a great example of a positive young Black woman. She is also a hard-worker and she definitely knows her stuff when it comes to style and fashion.

NEXT PAGE: ANOTHER PIC OF ANGELA SIMMONS & HER BOOTS

END_OF_DOCUMENT_TOKEN_TO_BE_REPLACED

Last weekend, Atlantic Records R&B singer Trevor Jackson was in Los Angeles for the 2013 American Music Awards. The event was broadcast live from the Nokia Theater L.A. Some of this year’s performers included TLC, Rihanna, R. Kelly, Justin Timberlake, Kendrick Lamar, Lady Gaga and more. Before the main event, a few of YDBR favorite celebs walked the red carpet in their cutest and best ensembles and posed for pictures. See the recap here!

The “Drop It” singer walked the red carpet in a $2,490 DSquarded2 Blue Paisley Silk Tie Napoli Jacket with a white shirt and denim jeans from the brand. He completed his look with Gucci shoes. Jackson was styled by Luxury Law.

This long sleeve glossy royal blue and black blazer features Jacquard paisley pattern throughout, a notched lapel collar, single-button closure, breast pocket and flap pockets on the front. You can purchase it at SSENSE.

Trevor’s most recent EP, #NewThang is now available on iTunes.

Trevor is best known for playing Kevin Blake on Syfy original series Eureka and for playing Kris McDuffy on Disney Channel’s hit movie Let It Shine. He reminds me of an early version of Chris Brown. I am rooting for him and want him to blossom in the music industry. 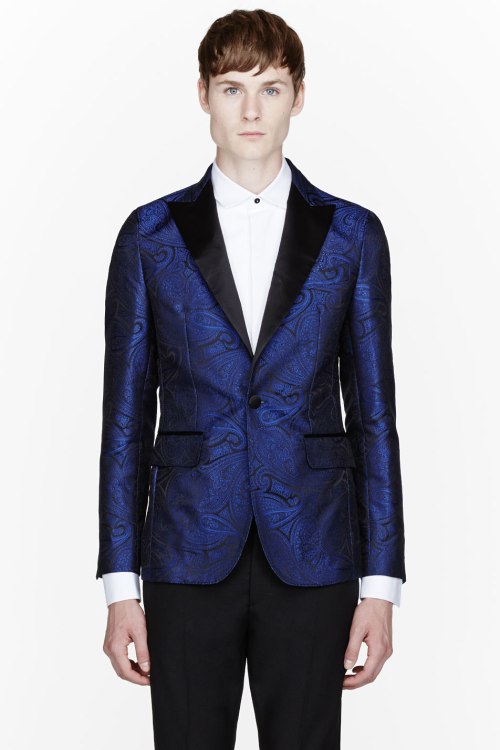