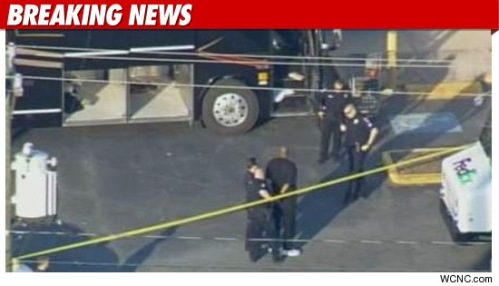 According to TMZ.Com Rapper Waka Flocka  was involved in a shooting after shots were fired at his tour bus in North Carolina. Waka dodged multiple bullets today during a gun battle in Charlotte, NC … according to eyewitnesses. Below is how TMZ.com is reporting the story:

We’re told Waka — real name Juaquin Malphurs — was on his tour bus outside a car stereo shop when two cars pulled up next to the bus and opened fire. Waka was not hit.

An eyewitness tells us Waka’s security team returned fire on the cars and hit at least one of them. Waka’s publicist confirms his security team fired shots — and says the bus was shot 4 times.

FOXCharlotte is reporting police have detained multiple people — and that one person was shot in the shoulder.

WCNC in Charlotte aired footage (above) of police on the scene with a man in handcuffs.

Comments Off on Breaking News: Waka Flocka Dodged Bullets, His Team Fired Shots Back Hitting One Person In The Shoulder