Is He Going Pop Too Soon? Lady Gaga Announces That She Recorded A Track For Kendrick Lamar Album

When a rapper release a track with a pop star, the first thing that some music critics say is, “he/she went pop.” In that case, did Kendrick Lamar go pop too fast? Last month, I posted pictures of Lady Gaga and Kendrick Lamar in Chicago. Gaga was there to catch her friend K. Dot performance at the Pitchfork Festival. Today, their friendship was taken to another level. Earlier today, Gaga tweeted that she is featured on “Partynauseous” off K. Dot’s debut album, good kid m.A.A.d city which is due this Fall 2012.

“I wrote “PARTYNAUSEOUS” about Jakarta, and my relationship with that country. Wishing I could “get high with the enemy” and make peace. Once @kendricklamar + I started talking about life + his forward thinking views about love + hip hop, the song became something more,” says Lady Gaga.

Comments Off on Is He Going Pop Too Soon? Lady Gaga Announces That She Recorded A Track For Kendrick Lamar Album 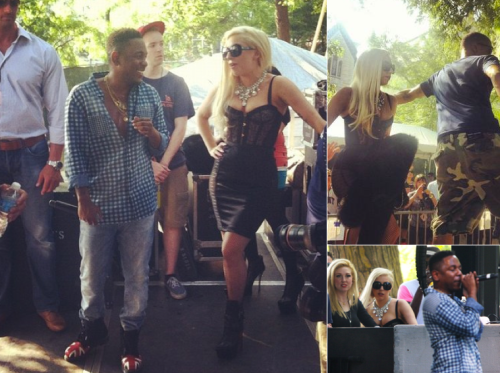 I remember a few years ago, Lady Gaga was performing on local stages inside of Manhattan nightclubs, now she is performing on global stages around the world. In the beginning, people didn’t believe in or understood Lady Gaga vision, but she still didn’t give up on her dreams. She took action, had a vision and now she is the biggest artist in pop music. Over this past weekend, the mutli platinum-selling recording artist was spotted in Chicago. She was in the Chi to support her new friend Kendrick Lamar during his Pitchfork Festival performance. Ha! I’m sure people didn’t foresee this happening but it was once said, “The complete opposite makes the best of friends.” Gaga was seen cheering on the Compton native as he performed. Last week, K. Dot released his T-Minus produced single “Swimming Pools (Drank)” which is featured on his upcoming album, kid m.A.A.d city, due October 22.

Comments Off on Showing Support To Her New Friend: Lady Gaga Spotted In Chicago Cheering On Kendrick Lamar