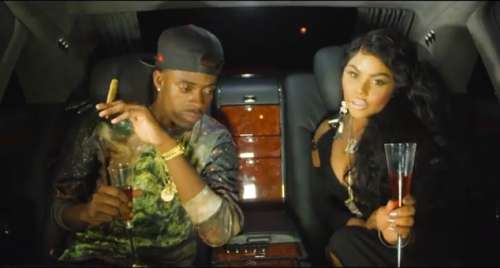 Lil Kim finally releases the visual for her street single “Looks Like Money,” starring Kimbella. Directed by Kalechi Noel, in the visual Lil Kim is shown posing along two luxury cars in the driveway of an undisclosed mansion. Kimbella from Love & Hip Hop also appears in the clip. She is in the background holding up a lot of money and dancing alongside Lil Kim. The three minutes visual also comprises footage of Lil Kim performing at Hot 97’s ‘Summer Jam‘, having dinner with Lil Mama and her protegé Tiffany Foxx and riding through her Brooklyn neighborhood on the back of a dirt bike and four-wheeler. She also enjoys the good life while drinking Moet and Ciroc in the backseat of a Maybach with RichHomieQuan.

END_OF_DOCUMENT_TOKEN_TO_BE_REPLACED 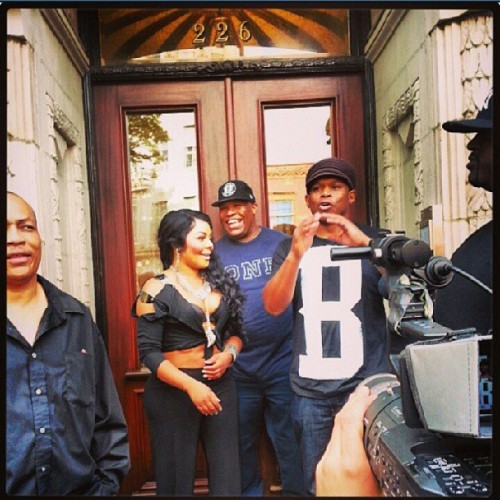 Lil Kim is really making a major comeback! Last month, the multi-platinum Grammy Award winning iconic female rapper announced that she’s releasing a new mixtape, entitled Hard Core: Back 2 Da Streetz, which borrows its title and is a sequel to her debut. She also released the official cover art. See the original post here. The Queen Bee recently went back to her Brooklyn roots to shoot a visual with RichHomieQuan and she also filmed a segment with MTV’s Sway. The shoot took place in the late great Biggie Small’s neighborhood. Kim was photo’d filming on a 4 wheeler and she brought out a couple of fly cars including a black Roll Royce Phantom. Some footage is floating around on Youtube; check out Lil Kim and Sway in Biggie Small’s old neighborhood, Lil Kim freestyling in Brooklyn, and Lil Kim riding a 4 wheeler. Stay tuned to YDBR as this story develops. Are you excited for Lil Kim’s comeback? 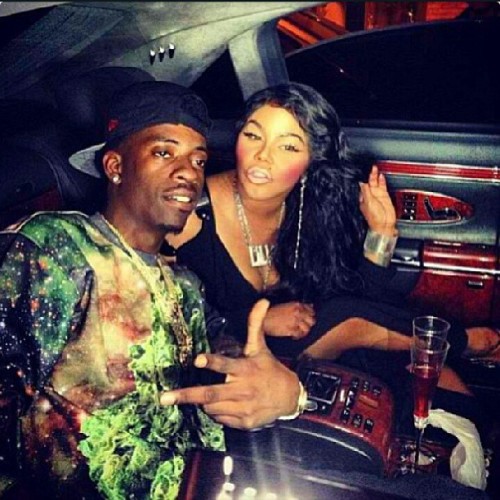 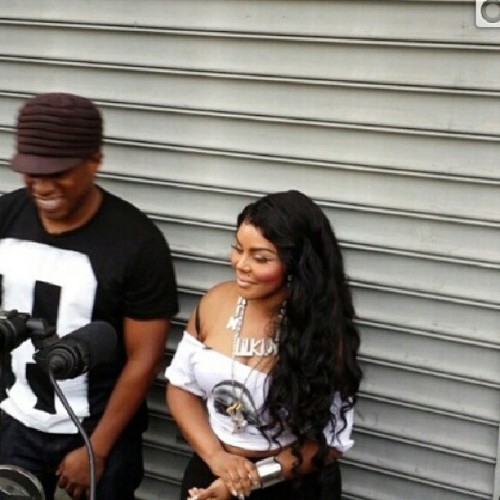 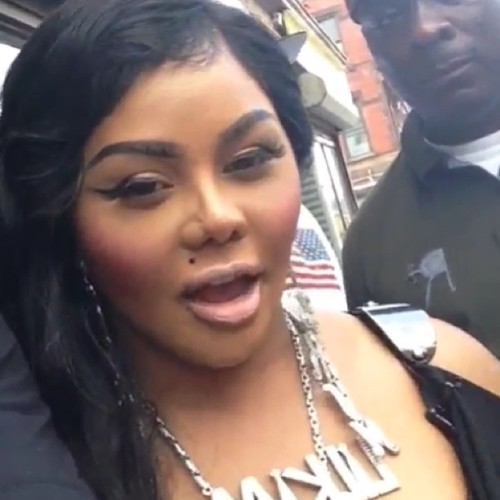 NEXT PAGE: MORE PICS OF LIL KIM FILMING IN BROOKLYN

END_OF_DOCUMENT_TOKEN_TO_BE_REPLACED

Over this past weekend, iconic female rapper Lil Kim traveled across the pond to London for a performance. She was scheduled to take the stage at LOVEBOX Festival, but her set was cancelled. There are various reports and rumors floating around surrounding Kim’s cancelled performance; however I am not going to talk about it in this post. Kim did make-up for her cancelled performance by inviting her fans over to her hotel for a meet-and-greet. Photogs caught Kim outside of the Andaz Hotel on Liverpool Street in London, England. The Queen Bee styled in a $204 Celeb Boutique ‘Mercy Blue Tribal Dress’ which she paired with black booties. Kim also added a waist belt to her ensemble. The electric blue dress features an über flattering tribal design and mesh around the bust & arms. What’s your verdict on Kim’s look? 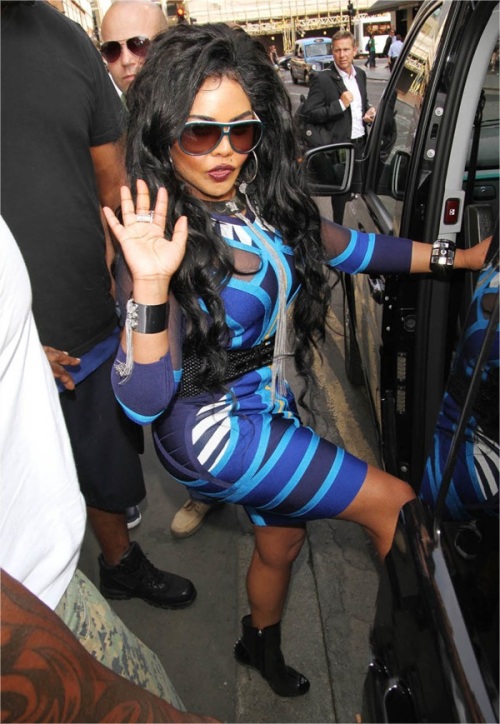 Last week Kim released her new track, “Look Like Money” and she isn’t wasting any time as she give fans a sneak peek of the visual. In the short clip, Kim is seen posing along two luxury cars in the driveway of an undisclosed mansion. Kimbella from Love & Hip Hop also appears in the clip. She is in the background holding up a lot of money. The track serves as her new single. Watch the clip below:

Over this past weekend, the Queen Bee (Lil Kim) hosted an event at Miami’s Cameo nightclub. Miley Cyrus, Teyana Taylor, NFL champion Bryant McKinnie of the Baltimore Ravens and former reality star Somaya Reece partied it up with Lil Kim. The crew popped bottles, danced and had a good time. A lot of twerking was going on! Kim tweeted, “My twerk team came out to show me love at cameo tonight @MileyCyrus @TEYANATAYLOR I Love u guys 🙂 !!!!! Muahhhh.” Peep the pics below: 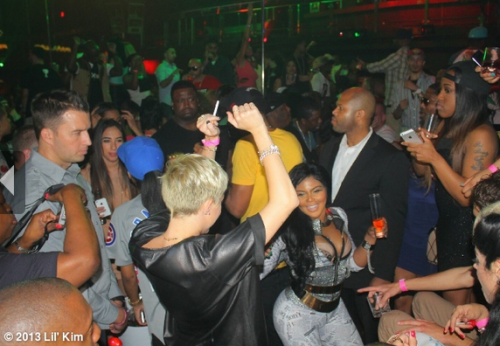 Over this past weekend, female Hip-Hop mogul Lil Kim walked the runway in support of NYC-based fashion designer Dominique Auxilly during The Reality of Fashion Reality of AIDS Runway Show at Mercedes-Benz Fashion Week. After the show, Kim was photo’d leaving the Altman Building in a patent-leather fur coat, showing her bra and some skin. Kim looked cute when she smiled for the cameras. The multi-platinum Grammy Award winning artist is rumored to be dropping a new album later this year. 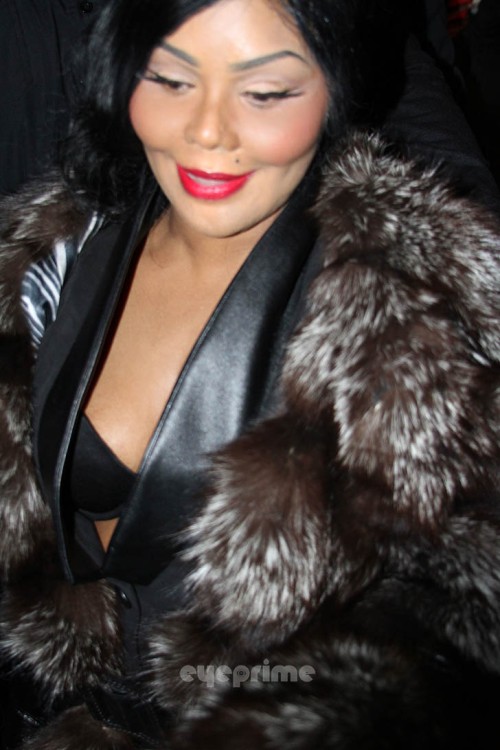 NYFW: Lil’ Kim Rocks the Runway For The Reality Of Fashion Reality Of AIDS Runway Show 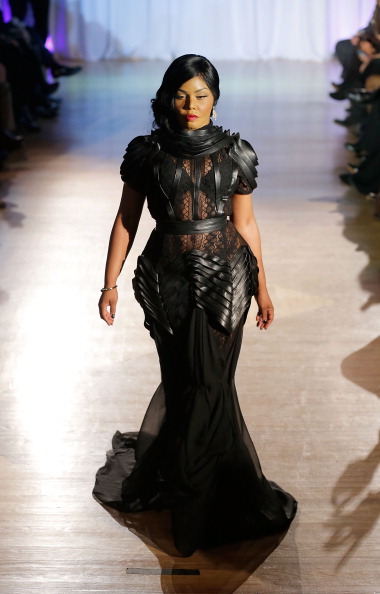 Last night Saturday (February 9), fashion designer Dominique Auxilly showcased her Fall 2013 couture collection during The Reality of Fashion Reality of AIDS Runway Show at Mercedes-Benz Fashion Week in New York City. Lil Kim looked elegant from head-to-toe in a black floor-length dress. The Queen Bee walked the runway alongside America’s Next Top Model Janice Dickerson, Drita from Mob Wives, Deena of Jersey Shore, Karlie Redd from Love & Hip Hop: Atlanta and more. The event also raised funds and increased awareness for the HIV/AIDS epidemic. The multi-platinum femcee is rumored to be dropping a new album later this year. Are you feeling Lil Kim’s look? Check out the pictures below: 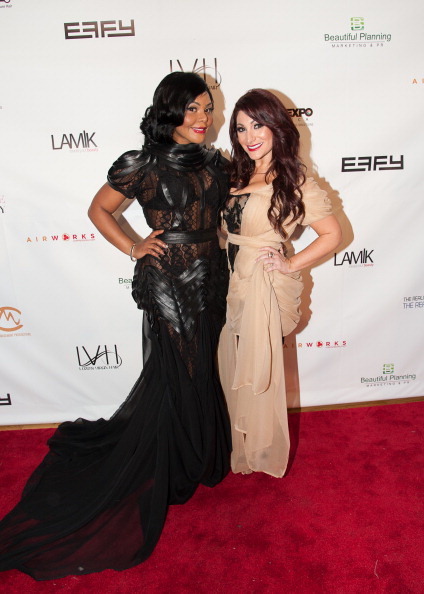 HIV/AIDS is a serious issue in many communities across the states, especially the younger communities. I strongly encourage all of my readers to get tested and practice safe sex. 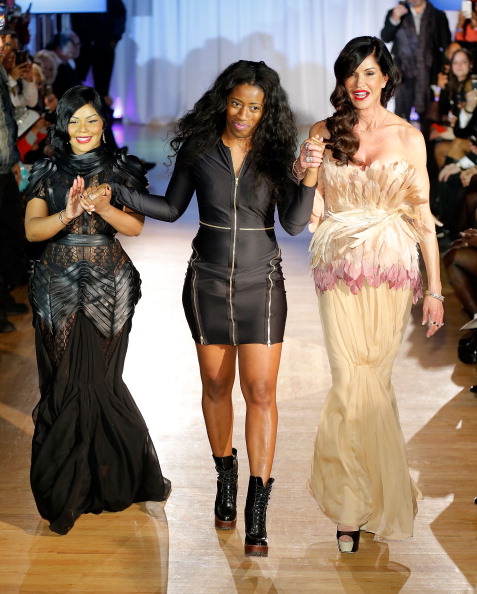 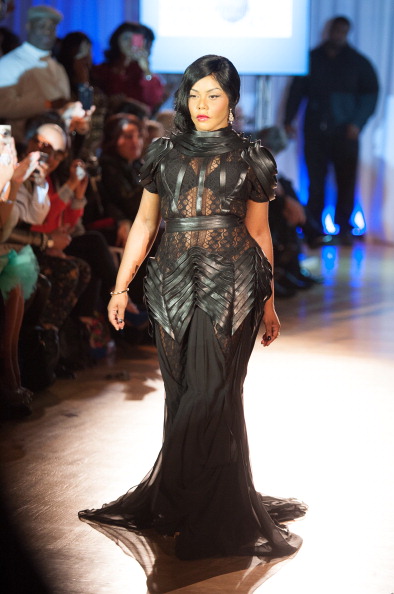 Comments Off on NYFW: Lil’ Kim Rocks the Runway For The Reality Of Fashion Reality Of AIDS Runway Show 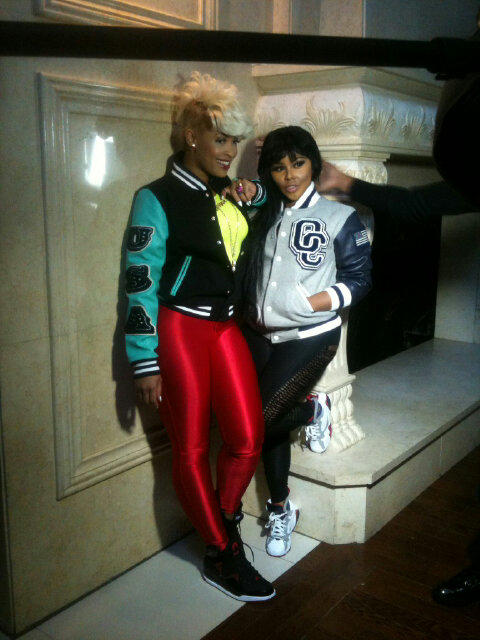 Over this weekend, Lil Kim and her artist Tiffany Foxx went to the Queen Bee’s stomping grounds (Brooklyn, New York) to film the visual to their street single, “Jay-Z”. The track is featured on Foxx’s Yellow Tape mixtape. For the shoot, the ladies rocked an around the way girl look which consisted of varsity jackets and Air Jordan sneakers. Carla Facciolo of VH1’s ‘Mob Wives’ was also on set for the visual shoot which was shot at the basketball courts on Clarendon Road. Tiffany Foxx is an up & coming underground rapper from St. Louis and she is signed to Lil Kim’s IRS (International Rock Stars) Records. In related Lil Kim news, she is working on her own reality show which will premiere sometime this year on TV One. Read the original story that I posted back in October here! Are you guys excited to hear and see some new Lil Kim in 2013? 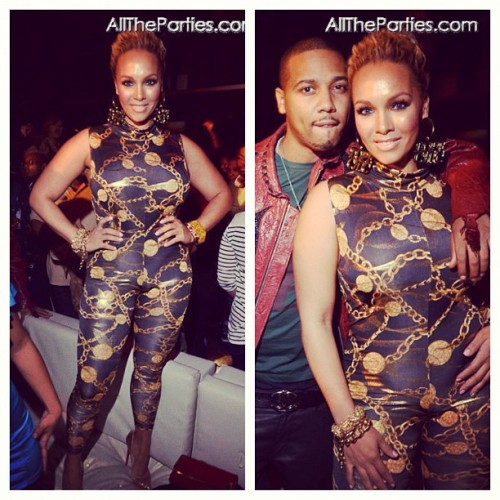 Over this past weekend reality star and model Kimbella partied it up at Manhattan’s Amnesia NYC Nightclub for her birthday. Her boyfriend/kid’s father Juelz Santana and good friend/rapper Lil Kim were in attendance. For the event, Kimbella wore a $200 Angel Brinks “3 Chains” Bodysuit paired with gold pumps. She accessorized her outfit with a pair of Its Rich Girlz “Dope Chick” Earring. In January, Kimbella will be returning to season three of VH1’s Love & Hip Hop. She is such a sweetheart with a nice personality. I last saw her at the  ‘A Night of Beauty’ at The Nail Boutique which was hosted by Yandy and the cameras were rolling. What are your thoughts on Kimbella’s outfit? 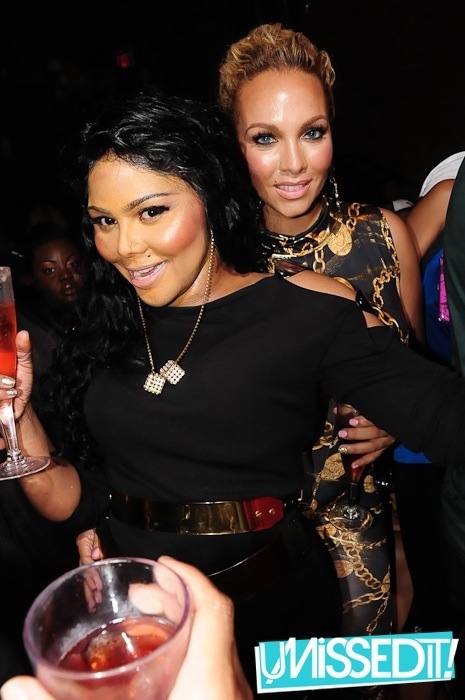 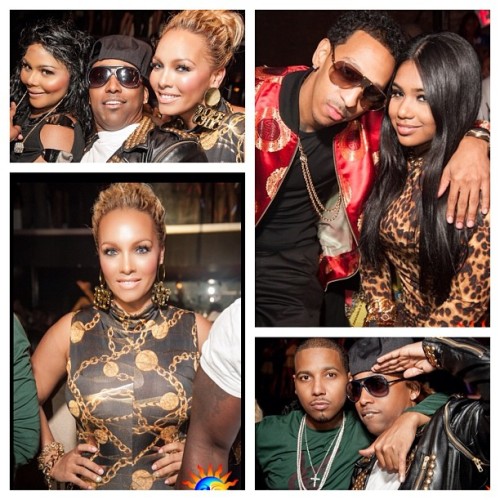 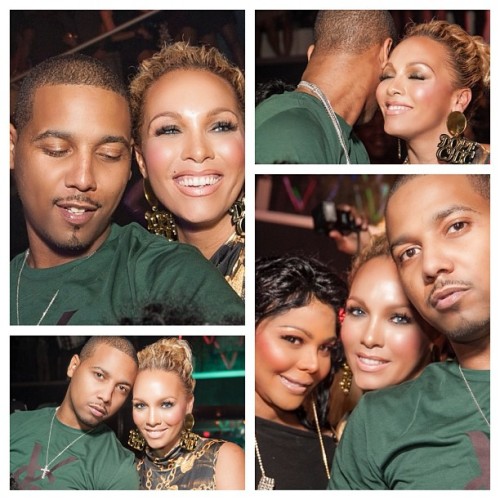 Over this past weekend, the 2012 BET Hip Hop Awards was taped at The Boisfeuillet Jones Atlanta Civic Center. The show will be televised Tuesday (October 9) at 8pm on BET. Comedian Mike Epps hosted this year’s event which was opened by Wiz Khalifa who brought out special guests Young Jeezy and Juicy J. Rick Ross, Meek Mill, Kirko Bangz, Diddy, French Montana, Uncle Luke, Future, Machine Gun Kelly, T.I. and 2 Chainz are also set to perform. Missy Elliott, Busta Rhymes, Fat Joe and 50 Cent will share the same stage for a Chris Lighty tribute. Hip-Hop legend Rakim will receive the “I AM Hip-Hop” Award. After the show, it’s the afterparty! Lil Kim popped bottles of Moet and partied it up with boxer Floyd Mayweather and singer Ray-J at Life Nightclub. For the occasion, Kim wore a black and silver outfit and carried a red Louis Vuitton clutch while Floyd kept it casual in a black Louis Vuitton short-sleeved sweater and white jeans. Peep the pics below: 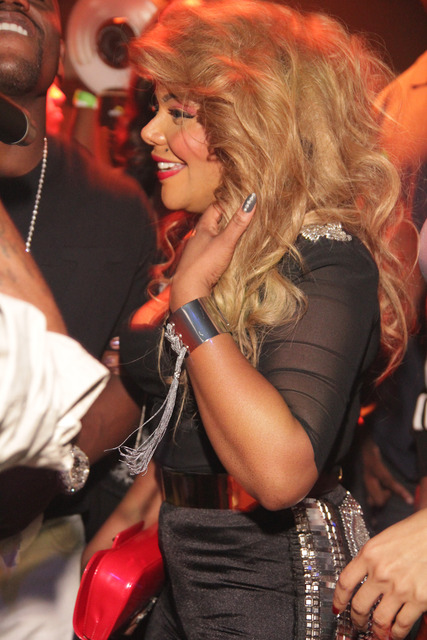 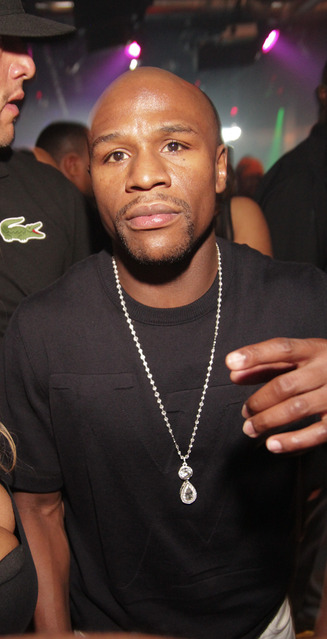 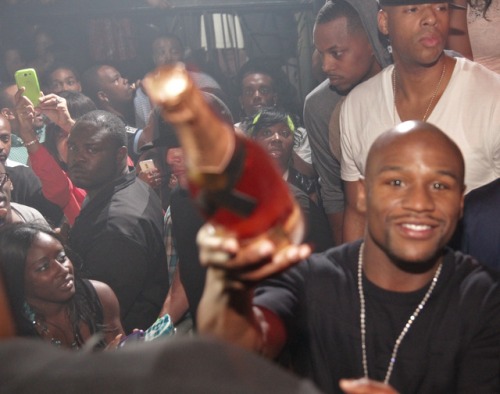 Don Bleek Exclusive: Lil Kim Is Getting Her Own Reality Show On TV One 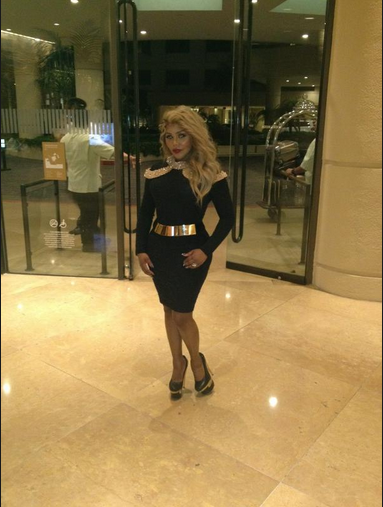 This is a Don Bleek exclusive! The Queen Bee (Lil Kim) is coming back to reality TV. Over this past weekend, before Lil Kim partied it up with boxer Floyd Mayweather and singer Ray-J at Life Nightclub in Atlanta, she flew to Los Angeles for a business meeting. I can attest that the private dinner meeting was held at the Beverly Hilton hotel. On Lil Kim’s upcoming reality show, most likely she will give her fans a glimpse look into her life as she revamp her image, brand and career. At Kim’s private dinner meeting, her, her brother and small entourage ate lobsters and drank wine. 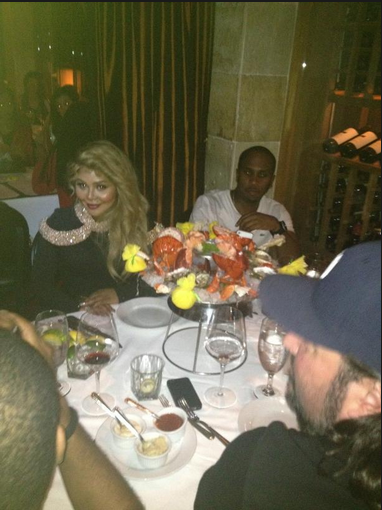 At the current moment, I do not have an exact date for when the show is scheduled to go into production but this is something that I am definitely interested in seeing. This is not Kim’s first time on the reality TV screen. Back in 2006, BET premiered the show, Lil Kim: Countdown To Lockdown which was filmed before Kim headed to prison. Her new show has been picked up by TV One who also hinted that Kim is filming a reality show for their network.

I also reported that Kim is working on a Rock/Rap fusion track with Kelly Osbourne for her new album as well as an episode for VH1′s ‘Behind The Music’. It feels so good to see Kim back at work! Are you guys excited for her upcoming projects?

Tagged as Don Bleek Exclusive: Lil Kim Is Getting Her Own Reality Show On TV One, Lil Kim, Reality Show, TV One