He’s Better Than Ever: French Montana Confirms Ma$e Recorded A Collabo With Him & Rick Ross 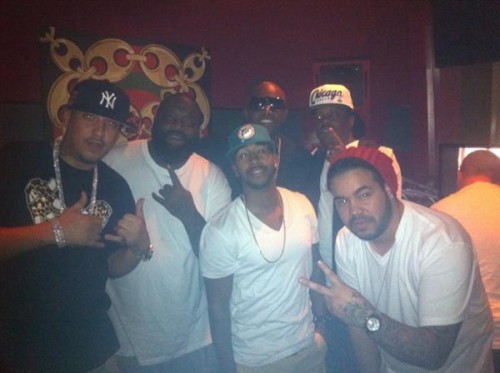 Earlier today, I posted pictures of platinum-selling rapper Ma$e in the studio with Rick Ross, French Montana, Rico Love and Omarion. Emails flooded my inbox and Twitter @donbleek88, asking me was Ma$e back and if he’s signing to Ross’ Maybach Music Group. At the moment, I will confirm that Ma$e is indeed back. Hip-Hop site XXLMag.Com reached out to French Montana and he did confirmed that Ma$e was in the studio with them and recorded a collabo with him and Rick Ross.

“We were in a Miami studio last night and Ma$e just stopped by,” Montana told XXL.“We were just workin’ on my album. We recorded two songs together—me, Ross and Ma$e. You might hear [Ma$e] on either my album [Excuse My French] or Ross’ [God Forgives, I Don’t] or both.”

Montana wasn’t able to speak too much on the Ma$e situation but he did say that the Harlem rapper sounds good. “We been planning it,” French said. “Ma$e sounds good, sound like he never left. His flow is crazy. We’re going to let the world hear soon enough. Stay tuned. Just stay tuned.”

French Montana debut LP, entitled Excuse My French and Rick Ross’ God Forgives, I Don’t will be out soon.

Comments Off on He’s Better Than Ever: French Montana Confirms Ma$e Recorded A Collabo With Him & Rick Ross

Kanye West and Future were also spotted in the studio. According to FSD, “Yeezy has recently collaborated with producer Sonny Digital (Future’s “Same Damn Time”) alongside 2 Chainz for a new track, but I’m not sure if Future is featured on that joint as well. Only time will tell.”