Last night, I hit Manhattan for a night out on the town. I attended the NYC premiere screening of the upcoming reality show, Starters Wives Confidential which is set to premiere next Tuesday January 29th on TLC. The event was held at Inc Lounge at The Time Hotel and spearheaded by 135th Agency.

Starters Wives Confidential gives viewers a glimpse into the fascinating and complicated lives of celebrity news. Josie Harris (ex-finance of boxer Floyd Mayweather Jr.), Liza Morales (ex-girlfriend of professional basketball player Lamar Odom of the L.A. Clippers), Tashera Simmons (separated from Hip Hop legend DMX), Monica Joesph-Taylor (separated from DJ Funkmaster Flex), Zakia Baum (ex-girlfriend of rapper Maino), and Cheryl Caruso (ex-wife of accused mobster Phil “Philly” Caruso) spent years in the shadows of their exes–supporting them emotionally and sometimes even financially as they rose to fame. The “starter wives” raised the children, kept the homes and stood by their men through it all.

But in the end, these relationships soured. The women were left to start over and figure out how to get along with their famous exes well enough to raise children together. The ladies are moving on and creating new lives that will afford them (and their children) the security, success and happiness they deserve. 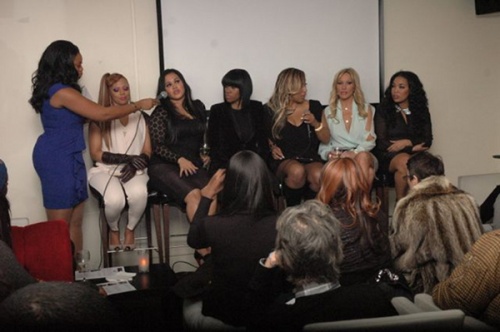 After we saw the show’s premiere episode, there was a post-screening Q&A which was moderated by model/actress Liris Crosse. All six cast members (Josie Harris, Liza Morales, Tashera  Simmons, Monica Joseph-Simmons, Zakia Baum and Cheryl Caruso) spoke and answered questions during the Q&A. I also got the chance to interview 5 out of the 6 cast members and I will post the first interview with Tashera Simmons on Tues to coincide with the premiere of the show.

Tashera Simmons, “I was 100% mother and wife.  When I love, I love hard. [DMX] was great at what he did – which was cheating – but I’m happy as hell now. I’ve found someone very special in my life. He  [DMX] actually asked me to get back with him and work things out once he found out that the show was airing and I said, ‘are you crazy, Earl?’”

Liza Morales, “[Lamar] is the only man I’ve ever been with. I know the worth of my cookies.”

Josie Harris, “Actually, I went to see [Floyd Mayweather] last week and we had sex about three-months ago.”

Zakia Baum, “I’ve never done [Maino] dirty. So it’s time for me to tell my story. However, Maino is a great father”